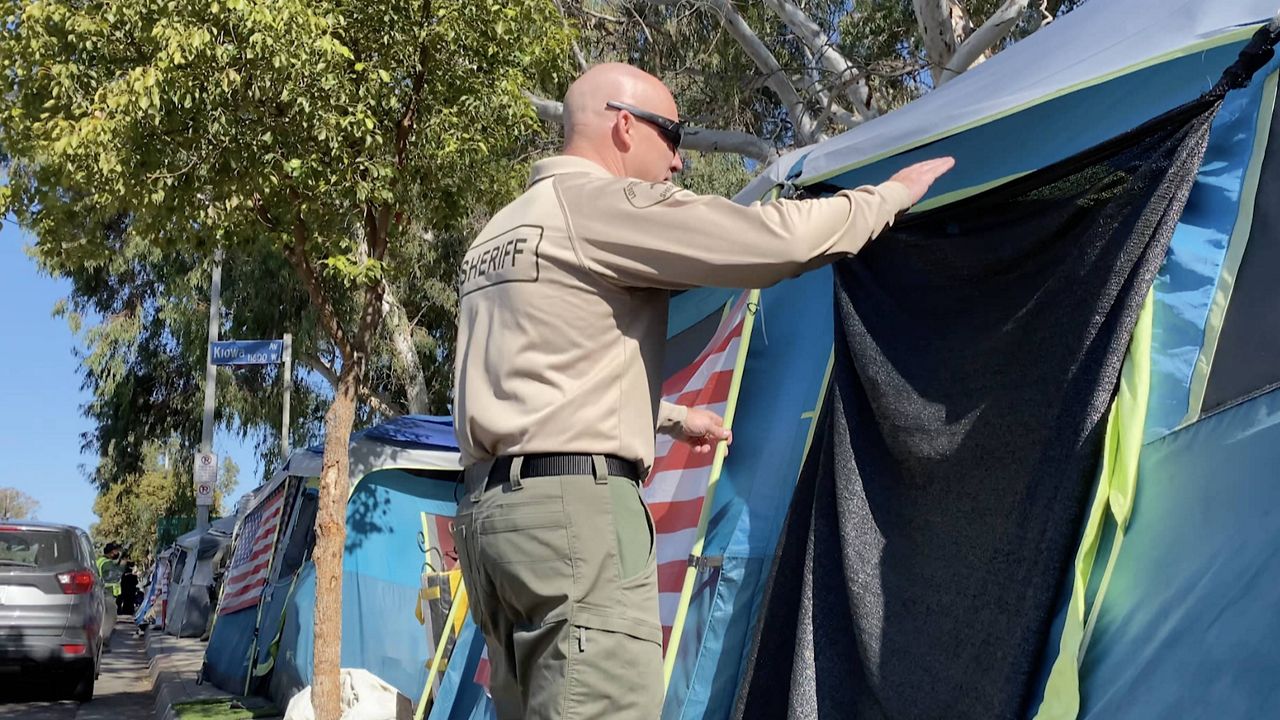 Advocates try to find a solution for the Veterans Row

LOS ANGELES – It can be surprising to hear music as you walk past a homeless camp near the Veterans Medical Center in Brentwood. Lavon Johnson, 34, an Iraq war veteran, has set up a piano next to his tent.

“I don’t know what I’m doing. I’m just pushing buttons. Everything in me comes out,” he said.

What stands out is the result of years of trauma from the loss of friends. Johnson, who has been homeless for some time, could not say how long this latest stint lasted.

His days at Veterans’ Row encampment are numbered because the site was selected for a cleanup on November 1. Los Angeles County Sheriff officials with the Homeless Outreach Services Team, or HOST, have stopped by to offer information and services.

In the last attempt, Kitchin and the HOST team have been out several times a week over the past month to try and reach out to the veterans who have been the hardest to reach.

“A lot of it is about building relationships and I’m a Marine Corps, US Marine Corps veteran. Some of my HOST team are veterans. I ask these veterans to come here to better connect with some of the people. ‘between them, “Kitchin said.

Another veteran rolling up his sleeves was Robert Reynolds. Reynolds was one of the homeless veterans of Vet Row, and once he secured services and housing he returned to help the soldiers who were still in tents.

However, there has been a sense of urgency lately to house the vets in recent months as several cars have crashed into the encampment, injuring people. In September, a veteran was stabbed to death.

“It was tough when Andre passed away, but honestly the veterans who die here are nothing new. It’s something that got me involved in the first place,” Reynolds said.

The VA estimates that there are approximately 4,000 homeless veterans in Los Angeles, and when they accept services and help, it can take a long time for them to be housed.

“To get someone from start to finish, it might take a few months, especially if they don’t have any ID or whatever. So there really has to be a place on the property where they can. sit in the interim, ”Reynolds said.

On November 1, when the cleanup takes place, veterans will be able to pitch their tents on VA property for the first time without being required to participate in an existing program called Care, Treatment and Rehabilitation Services, or CTRS, in exchange of their transfer to the property.

“This property was meant to be a soldier’s house. It should be a place these guys can come and take refuge and not be on the street,” Reynolds said.

Reynolds hopes this will help veterans make a slow transition to more services and possibly housing. Although Reynolds has said it, the VA needs to make significant changes to address veteran homelessness, such as extending their hours of operation and reassessing the reasons why Veterans are sometimes excluded from programs.

“We will be placing the veterans who currently live on Veterans Row in housing by November. We will house 500 more homeless veterans by the end of this year, ”McDonough said.

For Reynolds, it was good news, but he said he took it with a grain of salt. After all, the VA was supposed to have opened 1,200 homes for vets in September of last year, so far only 50 have been completed.

This isn’t the first time the VA has kept a promise, Reynolds said.

“On the day Andre died, the directors of the VA came here and said they were going to have tiny houses ready for the veterans within three weeks. We are now pushing for five weeks and it’s not happening. is still not produced, ”he said. .

What is happening is the cleaning.

Johnson bursts into tears when asked about it. He said that while he knew it would happen eventually, he feared the change would end up dividing the band and ending their song.

Spectrum News contacted the VA Greater Los Angeles Healthcare System and asked them two specific questions about the situation. Below are their answers.

Currently, there are only three tiny shelters on the West LA campus. Why is it taking so long for the rest to be placed?

Transitioning to Tiny Shelters provides a more sustainable and comfortable accommodation environment for unhoused Veterans seeking medical care and an initial entry accommodation option on their journey to permanent supportive housing. . The initial phase of transitioning from tents to Tiny Shelters is complete and GLA will continue to partner with community and municipal entities to place the remaining Tiny Shelters while ensuring compliance with stated regulations.

What changes does the VA hope to see once the camp is disbanded?

Our mission is to end veteran homelessness through a Housing First model because we believe that no one who has served our nation should be homeless. The VA Greater Los Angeles (GLA) Health System is committed to fulfilling this mission through the wide variety of programs and services provided by our Community Engagement and Reintegration Services (CERS). The ESRB, in collaboration with our local and federal community partners, is proud to connect our Veterans with quality health care, community employment services, justice and reintegration related services and solutions to housing that will help break the cycle of drug addiction, incarceration, and chronic homelessness. Once the camp is disbanded, GLA will continue to work diligently to provide services, build relationships and connect our homeless and at-risk Veterans with the resources that are integral to their rehabilitation.

Letter: Bosley endorses Bond as ‘most qualified’ for mayor / iBerkshires.com