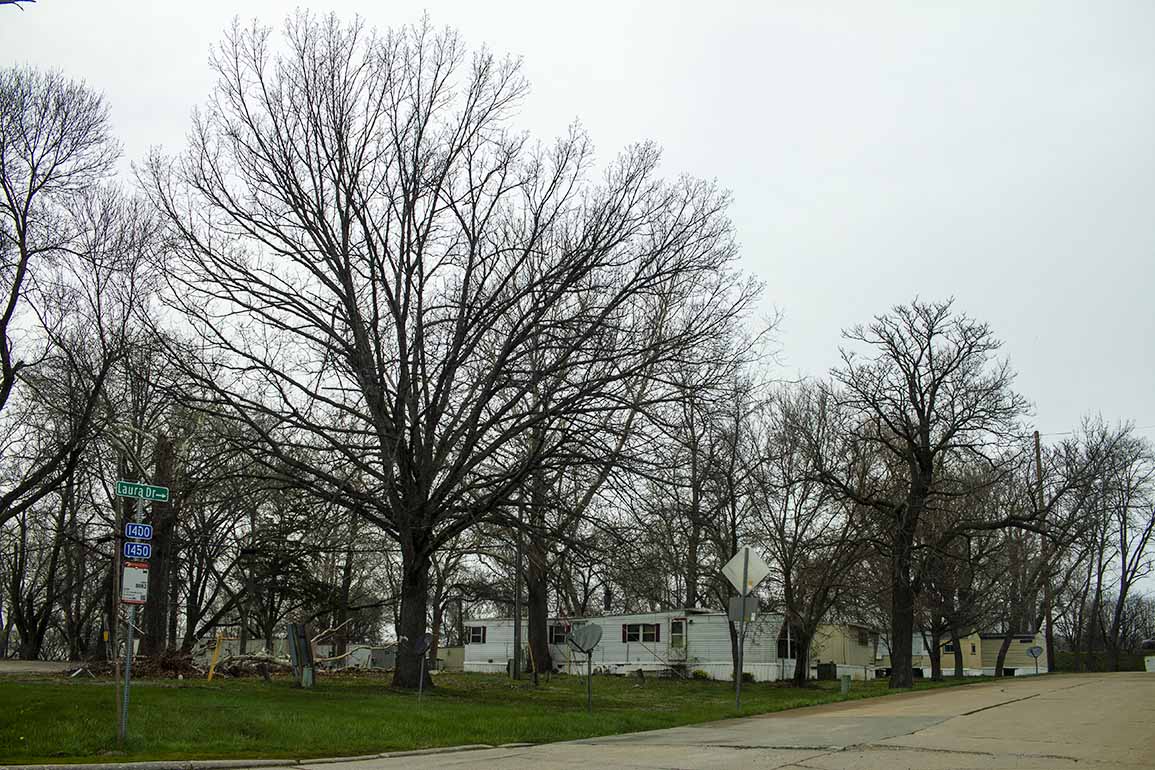 Cindy Onnen has lived at Forest View Mobile Home Court for half a century. She moved there with her husband and 2-year-old son in 1971 when the rent was $25.

She had two other children and the family of five lived together in a 10ft by 45ft trailer. “Well, we’ve all learned to get along,” she said.

The Forest View area includes the Mobile Housing Park, located south of Interstate 80 and west of Dubuque Street, as well as 73 acres of surrounding land. The park has changed since its inception in 1948, changing hands between four owners and seeing new residents come and go.

Onnen has also worked for Forest View for almost as long. She stopped counting after 40 years. From general upkeep and groundskeeping to finance and office work, she does little to keep the park running.

And when her neighbors need help, she will lend a hand. She watches over the elderly residents, so they can stay home. If anyone needs help with their garden, she’s there with a mower. During the pandemic, she delivered school lunches to neighborhood children.

But Onnen has also seen Forest View gradually deteriorate since she started working there. There were breaks in water pipes, telephone lines and even gas pipes. There were around 100 households in Forest View in 2019, but today there are less than 60.

“I think the last six years have been the worst since they decided to shut it down and do the new one. [development]. Because then the trailers started disappearing, the windows broke,” she said. “The starts were difficult. Because there were many people who left and gave me a special goodbye.

Redevelopment plans for Forest View began circulating in 2016. The following year, the Iowa City Council amended the North District plan to include mixed commercial uses and single and multi-family housing.

The plan was created by Forest View owner North Dubuque, LLC — a group made up of Des Moines-based developer Blackbird Investments, Jeff Maxwell and Eddie Cole — along with the Center for Worker Justice (CWJ) and residents of Forest View.

The CZA would have provided a rent-to-own pathway for income-eligible residents for single-family and multi-family dwellings, a maximum relocation payment of $7,200 per household for those moving to another location, and a one-year notice period. of the moving date.

But since 2019, the $200 million development has made no progress. The company told Iowa City that the project will not proceed as planned and that it is looking for new buyers or project partners.

With promises of a redevelopment plan, Forest View residents have been reluctant to pay for home repairs, and with the COVID-19 pandemic, these repairs have become too expensive for some households.

The city had previously approved the use of emergency housing funds to help with pre-winter repairs. In 2020, he donated $5,000 to the Iowa City Federation of Labor, which purchased equipment and volunteer efforts to repair 24 units. In 2021, the City donated $17,500 to Habitat for Humanity for repairs and waterproofing. But an annual home repair program is a temporary fix that doesn’t fix the park’s declining infrastructure.

Instead, the Forest View Tenants Association and CWJ have proposed a $1.3 million voluntary relocation program, which will help between 82 and 87 households cover moving costs, down payments, security deposits, rent or other related costs.

The current relocation plan is a “proactive effort” to help residents before infrastructure fails or before the landlord’s decision to close Forest View on Jan. 1, 2023, according to city documents.

The town is not legally obligated to provide relocation assistance, but in recent months of working sessions council members have expressed a “moral obligation” to help Forest View residents. The city council unanimously approved the relocation program at its solemn meeting on April 19.

The relocation plan will provide $15,750 to all households that have been residents since June 4, 2019, when the CZA was signed, regardless of the number of people living in the household. The city plans to send out the first set of checks for $7,875 by mid-to-late May, and residents will receive the second set once they move out. Households that have already moved will receive the full amount in a single payment. To be eligible for assistance, residents must move before December 9, 2022.

Funding for the relocation program comes from the American Rescue Plan Act (ARPA), which allows funds to be allocated to address negative economic impacts. The City will use local funds, which are taxable, for households that moved before March 2020 or earn more than $40,626 annually. At least 12 households moved before or were above the income threshold, City Manager Geoff Fruin said.

Onnen is considering leaving Forest View, but leaving his home and his community is difficult. Her children also have mixed feelings, but they urged her to move out and work less, especially after her husband died two years ago, she said.

She plans to buy a house with her son, who also lives in Forest View. But everything is “up in the air”, which bothers her. She wants to know where she is going and what volunteer or work opportunities she will find there.

Mayor Bruce Teague celebrated the relocation program at the official council meeting on April 19, but acknowledged that the transition will be difficult for residents due to high rents in Iowa City.

“I’m going to be very proud to endorse this today,” Teague said. “I am also reminded that this road will not be easy for many because of the rent in our community. Now I think that’s something we have to keep working on.

Many council members thanked the residents of Forest View for their determination over the years. Council member Pauline Taylor said she was amazed by their strength and courage, calling the residents “great role models” for their children, family members and the Iowa City community. Shawn Harmsen said their community organization sends a message beyond Forest View, which Pro Tem Mayor Megan Alter echoed.

“Your strength, on top of your inspiration and hope, just sheer strength in the face of a huge challenge is truly inspiring,” Alter said. “It’s a model of how we should all work as a community.”

While Forest View residents have a way forward, the future of the 73-acre area is murky. The land has not yet been sold and redevelopment has stalled. When a new plan is created, the city will likely need to rezone the area and create a new CZA. It can take years for the shovels to hit the ground.

But for Onnen, she will find something to do and someone to help.

“Wherever I’m going, I know there will be people who need something, so I can keep myself busy,” she said. “I’m going to do something, and my kids know I’ll be out and active because that’s what their mom has been all their lives. So what’s next?