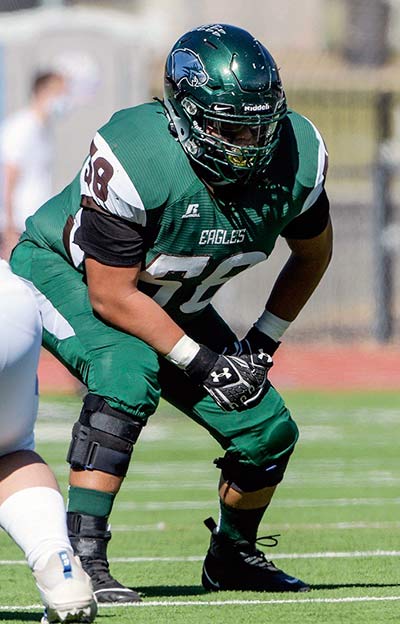 Brandon Vincent Nalnishi-Shirley helped the Flagstaff High football team on their way to the state playoffs.

It was the first time in nearly 14 years that the Eagles had come this far. Although they lost, it was a feat for the team to qualify despite the hectic 2020 season.

According to parents and coaches, Brandon brought a lot of talent to the team as a left lineman.

According to Bob Castillo, assistant coach of Flagstaff High, factors such as training from an early age and being coached by professional football coaches have helped make Brandon a valuable player.

“He’s a blue-chipper,” Castillo said. “The coaches who worked with him at Skyline (high school) really turned him into a Class A football player. He took first-team honors there in all regions, offensive tackle. He brought all that experience to Flag High for us.

“I definitely tapped into his knowledge of what he picked up there,” he said. “At this point, he’s just another coach on the line.”

Brandon grew up watching football from an early age. He started playing the sport in 5th grade at the age of 12 while attending boarding school in Tuba town.

“I still remember the moment the coach gave me a misstep by saying that I was on the football team,” Brandon said. “I always carry this with me.”

Brandon’s clan is Manygoats, born to the Coyote Pass clan. He was born into a loving family that includes his father, Vincent P. Shirley Jr., his mother, Evangeline Shirley, his sister Cheyanna and his brother Adriano.

He also has the love and support of his grandparents, Benjamin and Mary Worker, as well as his aunt Jessica Worker and his uncle Rick Worker.

“The goal was to help him get his education,” said Vincent. “It was the priority. And everything we’ve done, move to Phoenix, work there, and then come back to Flagstaff, it’s always been a priority as education and sports are second.

He played soccer, ran athletics and wrestled. But football is his passion.

It’s a sport that brings the family together, teaches them about life and helps them grow into a young adult.

“It’s still okay: God, family, school and football,” Brandon said. “These are the main things that I go through because a lot of things in football apply to life. There is going to be adversity in your life.

“You’re going to have to learn to overcome it like I’m only six foot one and a lot of the opponents I face are usually six foot to six five guys weighing 250 to 300 pounds and just learning how to figure out how I am. would approach them or watch a movie about them and learn how I can improve as a player, and that’s just a product of life, ”he said.“ It really helped me, and I truly believe that football is life. “

Brandon first attended Flagstaff High in 2016, but later the family moved to the Valley before the end of his freshman year when he was invited to play Skyline High in Mesa. He was trained by professional football coaches from Division 6A. Brandon has stayed with them, gaining a lot of recognition at Skyline.

“He’s a young man I’m so glad he came back to Flagstaff High,” Costillo said. “There is a saying, ‘Once an eagle, always an eagle.’ He brought it back to us and fitted in perfectly.

“I learned from him as a coach by what he brought to the program,” he said. “It was so easy to get along with him. The children adopted him. I will truly miss a young man, but whatever he does for a living he will be successful because of his work ethic and attitude, and all of his ability to overcome adversity.

“For young men like Brandon, overcoming these obstacles, it shows a lot about him and his character,” he said.

Brandon is a left tackle who plays on the line, a pretty big role in football.

“It’s an integral part of protecting the quarterback from the back, and Brandon is definitely an anchor for that left defensive tackle,” said Costillo. “He also brought experience with him. He even helped me during the many years that I was a coach.

“I learned from Brandon not only the different techniques he used and the work ethic, but he’s also an inspiration to other players,” he said, “and they are look to him for leadership. He’s communicating on the line of scrimmage with the players, and it’s just exciting to watch him play.

“As an offensive lineman, I’m almost guaranteed to have contact with every play,” Brandon said. “And over time, from fifth grade until now, I’ve always been good at stopping people.”

Despite intending to only have a seven-game season, the team were pleasantly surprised to learn that they would make the playoffs, the first Flagstaff team to do so in more than a decade.

“Honestly, I felt this (playoff game) was the best game I’ve played,” Brandon said. “It was ultimately a team effort. We cheered each other on during the playoff week and received motivation from our coaches.

“The coaches communicated and underlined: ‘We win as a team and we lose as a team!’ “, did he declare. “It was a great experience to face the fifth-ranked team in Conference 4A. They had a strong, balanced defense and had a high level offense, which made the experience an even greater opportunity to show my skills against a top defensive end, linebackers and defensive tackles.

Although they lost to the American Leadership Academy, he still considered it a great way to end his 2020 season.

A highlight of the senior year

“This season has also been very special for me because I have focused on my training, my playing time, my commitment and I have reflected on the difficulties that have challenged me,” said Brandon. “In my eight years of football, I have never missed a game. I was really lucky to be a beginner and to help other players perform at their best.

“We started this season with a lot of unknowns due to the pandemic,” he said. “Going to the playoffs was the highlight of my last year, a very emotional and exciting time, and an evening I will never forget.”

Parents and coaches believe Brandon has a very bright future ahead of him.

“I think what coaches and college scouts look for in players is how flexible a player is when they enter the program and what their strengths are,” Castillo said. “They look more at his attitude, being able to be a good learner, to learn quickly and to adapt quickly to their program.

“So I think they would be able to see those qualities in him,” he said. “He can compete for any position on the line, and given his abilities as a varsity coach, he could be for any position.”

His family is also very proud of him.

“Brandon is a young man who fears God,” said Vincent. “He has a lot to offer this world, and he is a Christ-centered individual who continues to be humble in everything he does.

“He doesn’t brag about this and that,” he said. “He lets his job do the talking, and it’s something that I’ve seen, and something that we, his family members, have shown to the outside world about work and education, the things that we get, we show through our work and effort, and that’s something we’ve instilled in him, and he’s got a long life to make things happen, whether it’s college football or going way beyond in his educational studies.

Brandon hopes to continue playing football at the next level and although he is not sure which college he wants to go to, he has already received numerous letters and invitations from schools in the area. He hopes to one day get a degree in sports medicine and help people in the future.

“There are a lot of things I want to do,” Brandon said. “I would like to spread the word of God as a missionary.

“I would like to have the opportunity to coach football in the reserve,” he said, “to help and inspire young men and women, to encourage them that despite their challenges, they can s ‘improve and learn to succeed. “