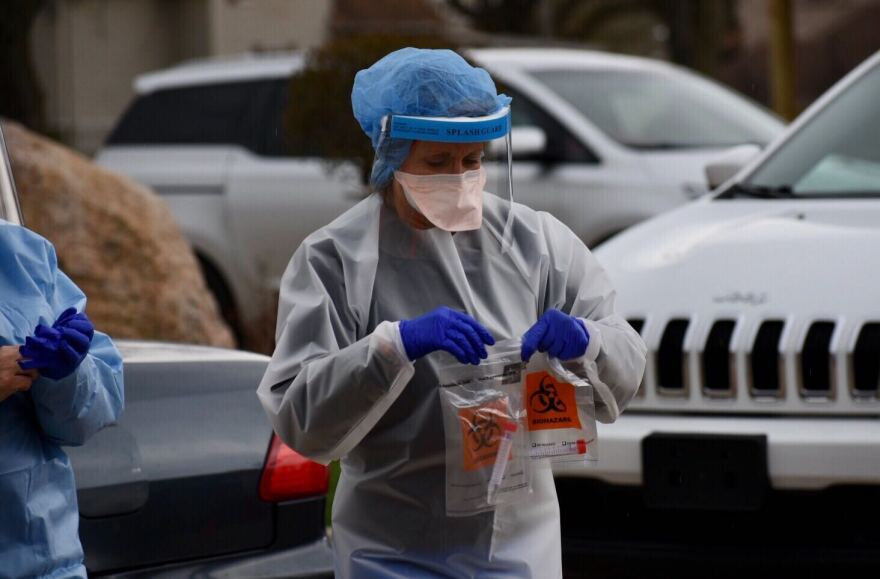 After Jamie White tested positive for COVID-19 on December 28, she was given no information on what to do for a full week.

“When I tried to reach the health department, I was told they were no longer doing contact tracing and I was given a phone number to call,” said White, who lives in Williamson County, southern Illinois. “But this number never picks up.”

It is a stark contrast to the experience of her husband and eldest son, who tested positive two days earlier, on December 26. They were quickly put in touch with a contact tracer, who confirmed the positive result and sent documents detailing the duration of the isolation. and their release date.

Communities across the United States are reporting record numbers of new coronavirus cases as the highly transmissible omicron variant continues to spread.

While the highly transmissible variant appears to be softer than previous strains, it’s still overwhelm hospitals – and local health departments responsible for contact tracing to prevent the spread of the virus.

“At the level of the cases we’re seeing right now, contact tracing becomes very difficult, if not impossible to do,” said Bart Hagston, administrator of the Jackson County Health Department in southern Illinois.

Throughout the pandemic, efforts to identify and quarantine close contacts varied from one state to another. By the summer of 2021, many states had begun winding down the contact tracing programs they had worked to expand the previous year, according to a survey of health departments conducted by NPR and Johns Hopkins.

More recently, several states, including Michigan, New York and Vermont, announced cuts to contact tracing efforts due to lack of resources and an overwhelming number of new daily cases. In Illinois, where more than 200,000 cases are reported weekly, the state is supporting contact tracing efforts and will prioritize high-risk cases involving people 65 and older. This decision is intended to ease the burden on local health services.

While this transition takes place, some residents say they are not receiving any guidance from anyone and the work of reaching out to people who may have been exposed to COVID-19 is left to those who test positive. .

White said when she was finally contacted by public health officials following her positive test, no one asked who she had been in contact with before falling ill. The link sent to her told her to inform her close contacts herself.

“It was just, ‘please let anyone you come in contact with know.’ So kind of an honor system, so to speak,” she said.

White said she reached out to her close contacts – and her family played it safe, staying home throughout the isolation period. But she worries that not everyone is doing the same.

“The most frustrating part is knowing that no one is getting counseling right now,” White said. because everyone is testing positive and no one really knows what to do.”

Jeremy Rosene’s son also contracted COVID during the Christmas holidays. Like White, he said the experience was very different from when he tested positive for coronavirus in 2020.

“I was bombarded,” Rosene said. “I remember receiving several phone calls from the health department, different people contacting me, not realizing that others had already done so…which is in stark contrast to what we have experienced recently, where I can I don’t lay hands on anyone, even when I’m the one making the effort.

The recent change in isolation and quarantine guidelines from the US Centers for Disease Control and Prevention has also added to the confusion.

Meagan Jarrett said when she and her children tested positive in late December, all she initially received was an automated text message.

“We just had a link to the website and then the phone number, that’s the generic state phone number they give to the website that says if you need any further guidance to contact your doctor,” said Jarrett, who lives in southern Illinois. ‘Jackson County.

While the CDC shortened the isolation to five days, Jarrett said his children’s school still required a 10-day isolation period. She said the Jackson County Health Department finally contacted her — a week after she tested positive.

Jarrett said she was also unable to obtain documentation proving she was ordered by public health officials to self-isolate and be off work.

The Jackson County Health Department announced on Facebook in December that it was no longer providing documentation letters. And Jarrett and others said they were unable to get the documents they needed from the state or their doctors.

“Some employers don’t understand, even when people are actually sick,” she said. “What worries me is that people might lose their livelihoods because of this.”

The Illinois Department of Public Health said in an email that the surge in cases has made it difficult to backtrack and issue release documents. But the agency expects people to follow the CDC’s latest isolation guidelines.

“The giant spike in COVID cases, the state centralizing contact tracing, the CDC changing isolation and quarantine guidelines, and testing, especially access to home testing, not being what ‘it must be right now,’ Hagston said. you have all these factors converging right now and making a pretty big mess, quite frankly.

The evolution of guidelines and protocols is confusing, even for some who work in healthcare.

Hannah Howell said she struggled to make sense of the information posted on the Illinois Department of Public Health website, despite being a registered nurse. Howell, who is working on a master’s degree in nursing, fears it will be much more difficult for people without a medical background.

“I don’t think people are going to understand the instructions, but I don’t think a lot of people care either,” Howell said. “There is so much pressure to get back to work. [And] we currently live in a society where opinions and beliefs are more valid than real facts and scientific facts.

This story comes from a reporting collaboration that includes WSIU and Public media on side effects – a public health information initiative based at WFYI. Follow Steph on Twitter: @stephgwhiteside.