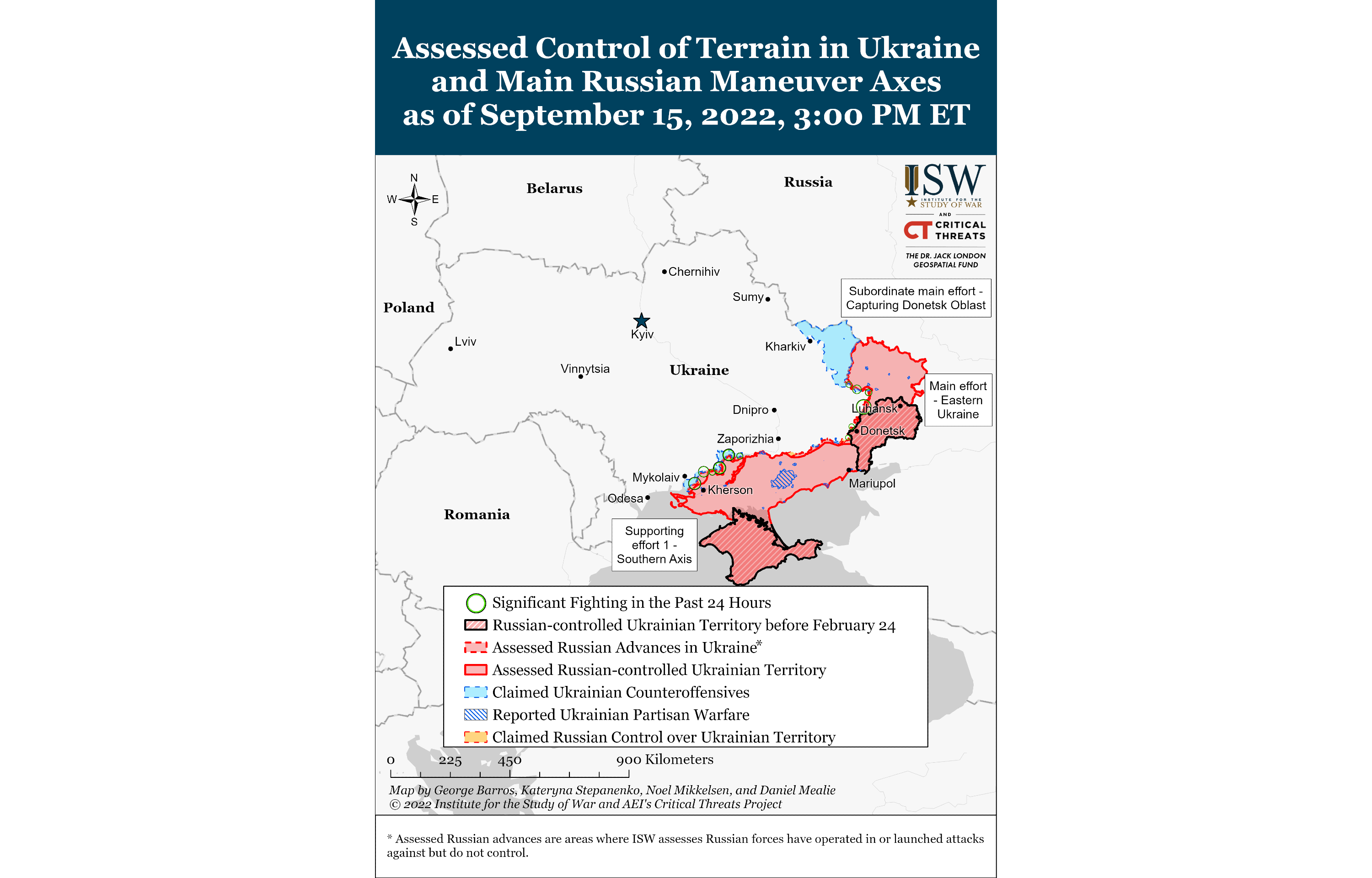 Ukrainian forces continue their counter-offensive operations in eastern Ukraine, putting increasing pressure on Russian positions and logistical lines in eastern Kharkiv, northern Lugansk and eastern oblasts from Donetsk. Russian sources reported that Ukrainian forces were continuing ground operations southwest of Izyum, near Lyman, and on the eastern bank of the Oskil River, apparently forcing Russian forces to withdraw from some eastern areas. of Ukraine and to strengthen others.[1] Russian forces in eastern Ukraine will likely struggle to maintain their defensive lines if Ukrainian forces continue to push further east.

The Kremlin is reacting to the defeat around Kharkiv Oblast by doubling down on crypto-mobilization rather than setting conditions for general mobilization. Chechen leader Ramzan Kadyrov has called on all federal subjects to initiate “self-mobilization” and not wait for the Kremlin to declare martial law.[2] Kadyrov claimed that each federal subject should prove its willingness to help Russia by recruiting at least 1,000 military personnel instead of giving speeches and holding unsuccessful public events. Russian propagandist Margarita Simonyan echoed the need for Russians to volunteer to join the war effort, and several loyalist Russian governors publicly supported Kadyrov’s speech.[3] The Russian-appointed leader of occupied Crimea, Sergey Aksyonov, has announced the formation of two volunteer battalions on the peninsula in support of Kadyrov’s pleas.[4]

The defeat around Kharkiv Oblast prompted the Kremlin to announce a Russia-wide recruitment campaign. Kremlin officials and state media had not previously issued nationwide calls for recruitment, but instead instructed local officials and media to generate forces apparently on their own initiative. Kremlin spokesman Dmitry Peskov vaguely welcomed the creation of the battalions on July 12, while 47 federal loyalist subjects announced and financed the recruiting campaign for the regional volunteer battalion.[5] A prominent Russian miblogger and proponent of General Mobilization praised officials such as Kadyrov for taking on the recruitment campaign of Russia’s ineffective Defense Ministry; this recruitment overhaul is likely to win more support for the Kremlin among nationalist figures who are increasingly critical of the Russian Defense Ministry, even if the campaign does not generate a large number of effective troops in combat.[6]

The Kremlin has likely abandoned its efforts to protect certain federal subjects from recruitment drives, which could increase social tensions. The ISW has previously reported that the Kremlin tried to protect residents of the city of Moscow from reports of the formation of the Moscow-based “Sobyaninsky Polk” volunteer regiment.[7] Russian opposition outlet The insider noted that several groups in the republics of Buryatia, Kalmykia, Tyva and Yakytia (Sakha Republic) publicly oppose the Kremlin’s emphasis on recruitment on an ethnic basis.[8] Simonyan’s statement on “self-mobilization” sparked many negative comments among Russians calling on Russian oligarchs to pay and fight in the war.[9]

The Kremlin has almost certainly drained much of the forces originally stationed in Russian bases in former Soviet states since the start of Russia’s full-scale invasion of Ukraine in February, likely weakening Russian influence in those states. . A Radio Free Europe / Radio Liberty (RFE/RL) investigation reported on September 14 that the Russian military has already deployed around 1,500 Russian servicemen from the 201st Russian military base in Dushanbe, Tajikistan, Ukraine since the beginning of the full-scale invasion and plans to deploy an additional 600 personnel from facilities in Dushanbe and Bokhatar, a city in southern Tajikistan, in the future.[10] RFE/RL further reported on September 13 that Russia has likely redeployed around 300 Tuvan troops from Russia’s Kant airbase in Kyrgyzstan to fight in Ukraine at various times since late 2021.[11]

The withdrawals of Central Asian states are notable in the context of border clashes between Kyrgyzstan and Tajikistan. Tajik and Kyrgyz border guards exchanged fire in three separate incidents on September 14, killing at least two people.[12] The upsurge in violence between Tajikistan and Kyrgyzstan, both members of the Russia-controlled Collective Security Treaty Organization (CSTO), is accompanied by renewed aggression by Azerbaijan against Armenia, state member of the CSTO. Russian forces also withdrew 800 men from Armenia at the start of the war to replenish losses in Ukraine, as the ISW has previously reported.[13]

Community bulletin board from September 15 to 21