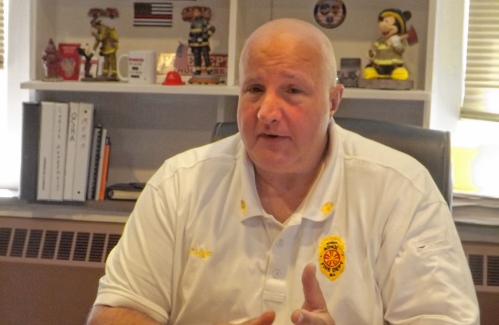 ATHOL – The Athol Fire Department is looking for motivated residents to assist in the aftermath of any variety of emergencies that the service and other first responders may need to respond to. The coordinator of the recruiting effort is Firefighter / EMT Andrew Bond.

“The CERT team is a community emergency response team,” said Bond. “They were created after September 11, basically with the idea of ​​recruiting people in the community who have no training or emergency experience to train to help the community in the event of a large-scale disaster, from emergency, pandemic like we did. now, in general, to supplement the fire department and other agencies.

“For example, other CERT teams have helped with the immunization clinics, they have staffed the clinics and volunteers to help with the clinics. They went to the community and helped people get to dates and things like that.

“In winter, they can set up heated shelters, as well as cooling centers in summer. “

He said volunteer citizens should not put their safety at risk, but could still help find damaged structures.

“If we were to pass a tornado, for example,” he said, “we could deploy them to areas to help search houses, depending on the situation. Every team is different. “

Bond said anyone over 18 is free to volunteer. There are no physical requirements.

“We will provide training,” he said, “and organize courses and give you whatever you need.

“The training consists of around 20 hours of lessons in which we cover a bunch of different topics. We cover topics ranging from terrorism response, basic first aid, fire response and basic search and rescue. It covers a wide variety of topics.

When asked if CPR certification would be provided, Bond said, “You wouldn’t be CPR certified. However, we have the option of bringing in instructors later for those who wish to be certified. Basically you will get a first aid exam and then as we continue we will bring in some instructors but CPR is not part of the curriculum. We will add it to other trainings.

The training will take place either at the Uptown fire station or at a location to be determined later, according to Bond.

“This will be based on the number of people who register to participate.”

Bond said attendance is not limited to residents of Athol.

Bond added that training is an ongoing process.

“But it’s purely voluntary. If we get a call and need you, we’ll send you an SMS or other notification. If you can show up, you show up, and if you can’t, you don’t.

The means of notification, Bond said, will be established by Chief Joseph Guarnera.

“He is in charge of the entire program. So it will be based on what he would like to do and how it will work.

It won’t be Athol’s first team, according to Bond.

“Athol had a team,” he explained. “We had a team at the start of the two thousand. It was suspended, I believe, around 2010. But the chief thinks it’s important enough to restart it.

Anyone interested in helping the fire department – and, by extension, the community – as a member of the CERT team should show up for a recruiting meeting at 10 a.m. on Saturday, October 2 at the Uptown Fire Hall.