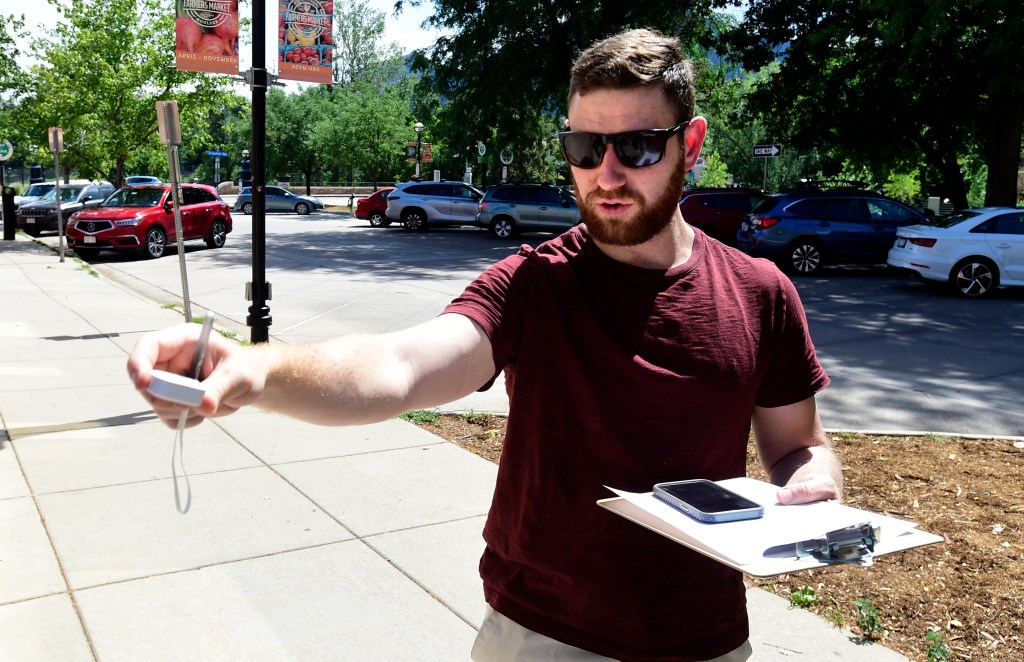 He stopped, just past the Boulder Museum of Contemporary Art, and took his first reading: 102.8 degrees.

Kumin was one of more than 100 people who took part in a day-long study to learn more about where extreme heat poses the greatest risk in Boulder. The city, which conducted the study in partnership with the National Oceanic and Atmospheric Association, is one of 18 across the country participating in the Urban Heat Mapping initiative this year.

The effort was carried out on Friday, which organizers determined was one of the hottest days of the year as well as a dry day with little to no cloud cover.

Some volunteers drove their cars, collecting data with high-resolution sensors mounted to record the temperature every second as long as the vehicle was traveling at 35 miles per hour or less.

Others, including Kumin, walked or cycled to collect data.

“I didn’t even know these tools were even available to capture this data. It’s really interesting,” he said. “I think I just thought the temperature was pretty consistent in the area.”

The fact that the temperature can be different in an area, depending on what grows naturally and the buildings and structures there, is something Kumin said he never really considered.

But conversations with Adam Hall changed that.

Hall, a graduate student at the University of Colorado at Boulder, helped coordinate Friday’s study as part of a university project.

“I always knew that urban heat was a problem; growing up in a city and seeing how much hotter our cities are than the region just outside,” he said.

“Thinking about environmental risks spatially is something I really enjoy,” Hall added.

Generally speaking, he expects areas with impervious surfaces such as concrete or asphalt to be much warmer than those with grass or water. The data is also certain to influence Boulder’s urban forest expansion goal, allowing the city to target tree planting in the hottest areas.

The most official data that can be replicated is collected by those in the cars, acknowledged Brett KenCairn, policy adviser for natural climate solutions.

But those who cross the streets on bicycles and on foot also have an important role, he noted.

“The other approach we’ve created is more of an experiential opportunity for people, but we think it has some potential down the road to be a way to do simple citizen science year after year to monitor those numbers.” , says KenCairn.

It’s also a good way for older adults and children to participate, he said.

The study is part of the new Cool Boulder campaign, which aims to expand natural climate solutions to impact the tougher set of climate goals adopted by Boulder City Council in 2021.

In addition to providing the city with information that could improve its climate preparedness, Boulder will provide the data collected on Friday to NASA’s Jet Propulsion Laboratory so that it can be used to help create new thermal models for Earth.