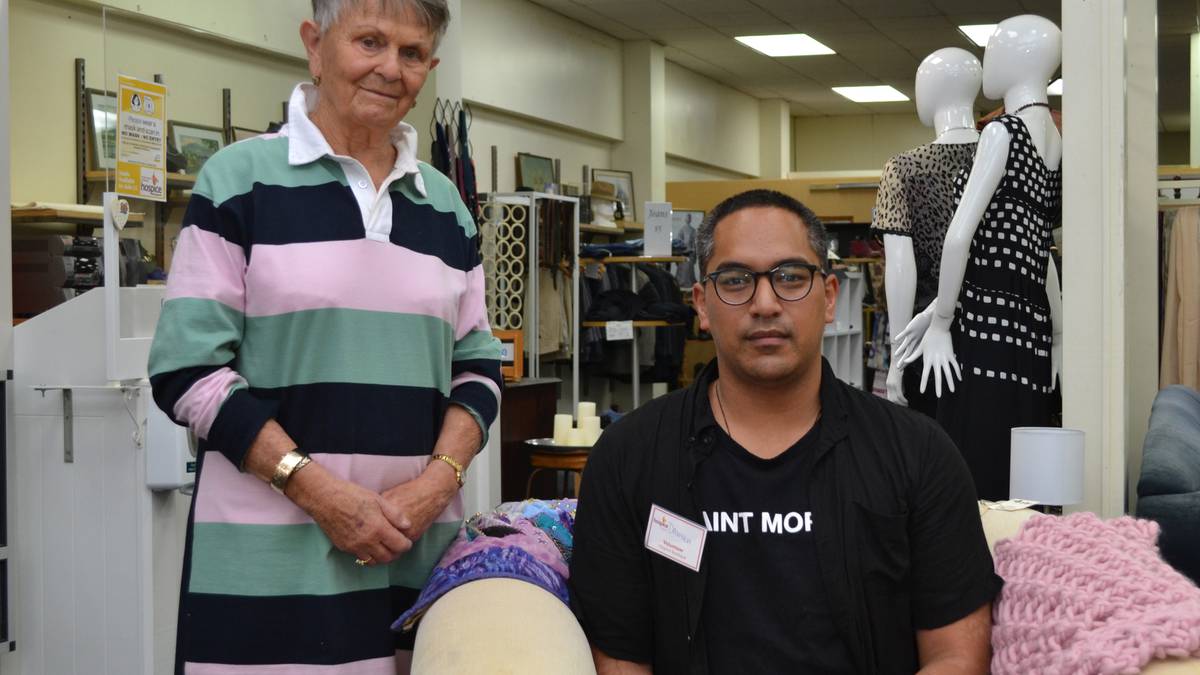 Changing the perception of the traditional volunteer

Damien Kiddie works full-time at Miter 10 Mega, but that hasn’t stopped him from volunteering for Hospice Whanganui for the past seven years. Lately he’s been a valuable part of the volunteer team at the Victoria Avenue Hospice shop, and when they learned he had a new role at Miter 10, which meant leaving the shop, the whole everyone gathered to offer him a farewell afternoon tea.
In attendance were Kelly Scarrow Hospice and Whanganui Hospice Executive Director, Davene Vroon.

When people think of Hospice volunteers, especially those who work in a shop like Hospice Boutique, they think of people who are a bit older, but this young Maori man has won the hearts of staff and customers alike.
“Every Friday afternoon, Damien walks through the front door with a big smile and his big dose of coffee, which always gives the signal that he will do anything today, whether it’s vacuuming , moving furniture or cleaning windows. He has a personality that just touches you and the team will miss him deeply, but we absolutely wish him well in his new role at Miter 10,” said Cushla Deans, Director acting at Hospice Boutique She couldn’t make it to afternoon tea.

Davene got a chance to say a few words before the team dived into the homemade spread on the table in the back room.
“I know how much you have brought to this team…they often talk about you, the drive you bring and the hard work you are,” she said, and addressing all the volunteers, added : “Thanks to you, we have Hospice.” She recognizes the long drive Damien makes from his home in Matahiwi on the Whanganui River Road to attend his shift. “This is an important commitment to our organization, our patients and their whanau.”

Damien’s response is brief. “Thanks, ladies. It’s been fun working with you guys: thanks for the banter and the clothes.” Damien has a reputation of being an avid buyer of the Hospice boutique.

“I don’t work on Fridays, but I make an effort every Friday to come see Damien and pick up a yak,” says Judy Firmin, a longtime volunteer at the store. “We will meet at Miter 10 for a coffee. We will hunt you down.”

“Damien has been such a valuable member of the boutique team,” says Kelly Scarrow. “He was one of our youngest volunteers, helping to change the perception that volunteering is only for retired people. He manages not only to work full time, but also to give one afternoon a week, which we will always be grateful. His banter with his team and customers and the love for our organization shines through in everyone who has the pleasure of engaging with him. There is a great synergy in working with the one of Hospice Whanganui’s supporters, Miter 10, and we look forward to working with them on an upcoming ‘Ladies Night’ — dates to be confirmed.”

Damien began his volunteering by helping with Hospice events when he worked at the Splash Centre. “There were two of us who had free time, so we both signed up as volunteers,” he says. They regularly saw Valda Brechmanis at the Splash Center and asked her how to go about it. Valda was a volunteer coordinator for Hospice.
It was an email from Valda last year, informing him that they needed a volunteer at Hospice Boutique, that led him to sign up for a Friday shift. He says he loved his time there and really enjoyed working with the team and engaging with customers.
He hopes other young people will be inspired to do what he has done. “We definitely need more volunteers.”

Nearly 30% of adolescents have “prediabetes”