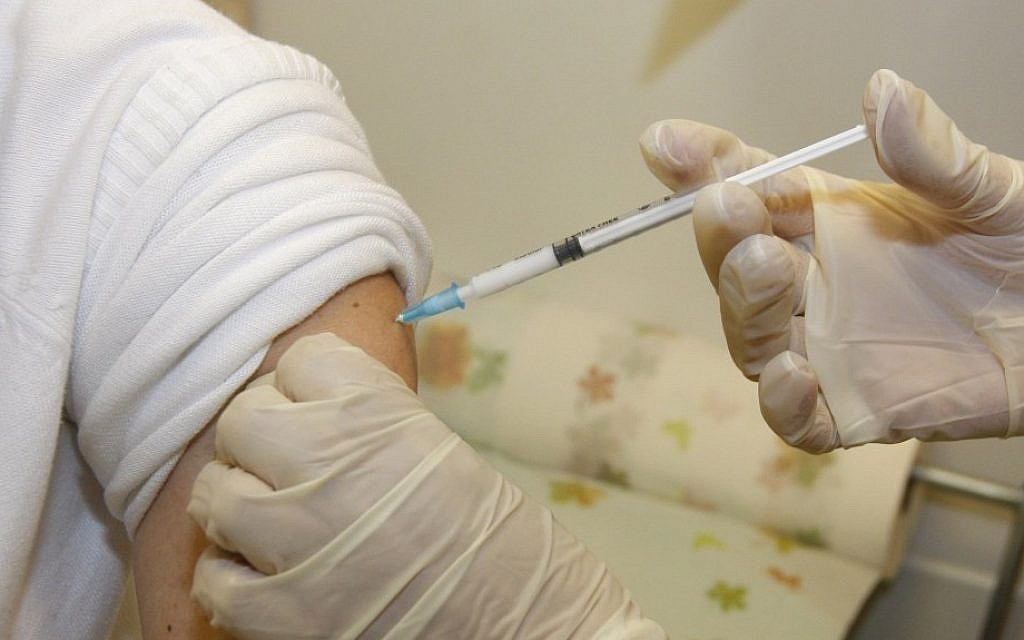 A senior health official said on Sunday that the health ministry would launch a polio vaccination campaign later this week to counter what she called “a real epidemic” of the disease.

The move comes after health officials confirmed the first case of the potentially debilitating disease in the country in more than 30 years earlier this month.

Dr Sharon Alroy-Preis, director of public health at the ministry, told the Kan public broadcaster that the campaign will aim to complete the two-dose vaccination schedule for children aged three months to 17 years who have only received a single dose.

She explained that during the years 2005-2013, vaccinations against poliomyelitis were reduced as the disease was defeated in the country and many babies who have since passed through the health system have not received both. doses.

The campaign, called “Two Drops”, will begin later this week in Jerusalem, where the case of the disease was identified, and then expand to the rest of the country.

“We are definitely seeing a polio epidemic in Israel,” Alroy-Preis said.

Besides the capital, the virus has been detected in sewage from Modiin Illit and Tiberias, she noted.

A child in Jerusalem who was recently diagnosed with polio is suffering from weakness and paralysis on one side, she said.

“This is just the tip of the iceberg, under which there are many other infected children,” she said.

Dr. Sharon Alroy-Preis, head of public health services at the Ministry of Health, speaks during a press conference in Jerusalem on the new coronavirus restrictions, December 12, 2021. (Yonatan Sindel/Flash90)

Earlier this month, the Health Ministry confirmed that a mutated form of the virus – which can cause disease in unvaccinated people – was found in a 4-year-old boy in Jerusalem who had not been vaccinated against the disease.

The case was believed to be the first polio diagnosis in Israel since 1989, after Israel largely eliminated the disease through an aggressive vaccination campaign.

Alroy-Preis has previously encouraged families to get their children vaccinated against polio and said there are likely to be dozens, if not hundreds, of asymptomatic cases of the disease.

Disease experts have warned of the real prospect of a resurgence in polio cases – in manageable numbers but enough to leave some children with long-term damage.

Traces of the virus have been found from time to time in sewage samples in Israel, but have not resulted in any clinical cases for several decades.

Like much of the world, Israel administers polio vaccines to children as part of its standard immunization schedule.

Poliomyelitis is transmitted mainly from person to person or through contaminated water. It attacks the nervous system and can sometimes paralyze people within hours. The disease mainly affects children under 5 and has been largely eradicated in wealthy countries.

The Associated Press contributed to this report.

If so, we have a request.

Every day, our journalists aim to keep you up to date with the most important developments that deserve your attention. Millions of people rely on ToI for fast, fair and free coverage of Israel and the Jewish world.

We care about Israel – and we know you do too. So today we have a question: show your appreciation for our work by join the Times of Israel communityan exclusive group for readers like you who appreciate and financially support our work.

yes i will give

yes i will give

Already a member? Log in to stop seeing this

You are a dedicated reader

We’re really glad you read X Articles from The Times of Israel over the past month.

That’s why we started The Times of Israel ten years ago – to provide discerning readers like you with must-read coverage of Israel and the Jewish world.

So now we have a request. Unlike other media, we don’t have a paywall in place. But since the journalism we do is expensive, we invite readers to whom The Times of Israel has become important to help support our work by joining The Times of Israel community.

For just $6 a month, you can help support our quality journalism while benefiting from The Times of Israel WITHOUT ADVERTISINGas well as access Exclusive content only available to members of the Times of Israel community.

Thank you,
David Horovitz, founding editor of The Times of Israel

Already a member? Log in to stop seeing this