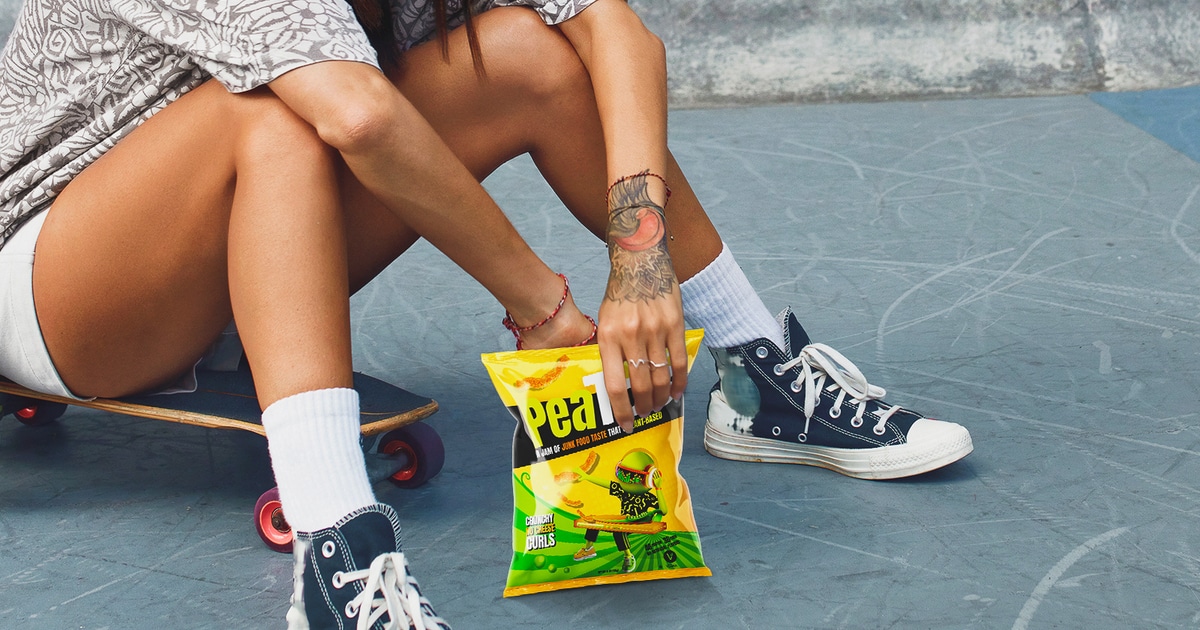 Los Angeles-based snack brand PeaTos is ditching animal products to switch to an all-plant-based product line in response to consumer demand and to disrupt the $29 billion salty snack industry. Prior to its transition, PeaTos was known for its Fiery Hot Crunchy Curls, the brand’s only plant-based item that consumers compared to Frito-Lay’s Flamin’ Hot Cheetos.

As part of its transition, PeaTos will launch a new product alongside two reformulated iterations of its fan-favorite original snacks. The brand’s new crispy pizza rings join classic onion rings that are newly dairy-free and vegan on grocery store shelves this month. PeaTos Classic Cheese Curls, originally made with dairy cheddar cheese, are also getting a plant-based reformulation, officially making it the first vegan yellow cheese snack curl on the market.

The new vegan snacks will be available at more than 4,700 retailers including Sprouts, Vons and Kroger nationwide, and online through PeaTos, Sam’s Club and Amazon later this month.

“Flamin’ Hot Cheetos is one of the most successful brands in snacking history,” PeaTos founder and CEO Nick Desai told VegNews. “When vegans discovered that our PeaTos Fiery Hot Crunchy Curls had all the taste and sensory experience of Hot Cheetos without dairy or artificial [ingredients], they went crazy. We had such a strong and passionate response from the vegan community – they begged us to make our other items vegan.

To further challenge Frito-Lay’s snack monopoly and provide consumers with healthier snacks, PeaTos plans to launch other Frito-Lay analogues in the near future. “There is a staggering difference between Frito-Lay’s brands and the rest of the market,” Desai said. “Our dream is to take a real challenge to this monopoly and develop a line of products that can become lasting household names while delivering on the promise of better ingredients and more nutrition.”

The new vegan company aims to retain the “junk food taste” of salty snacks while providing “better-for-you nutrition”, and does so by replacing corn with nutrient-rich peas and excluding artificial ingredients and additives from their formulations. Compared to standard snack offerings on the market today, PeaTos snacks offer twice the protein and three times the fiber, plus less sodium, fat and calories per serving. With proprietary technology that replicates the taste of dairy using plant-based ingredients, PeaTos is well on its way to breaking Frito-Lay’s monopoly.

“We didn’t set out to create healthy snacks, we set out to create better junk food,” Desai said. “Cheetos were invented in the 1940s and haven’t changed much since then. Technology has gone through a revolution. Does anyone use phones first created in the 1940s? Cars? We wanted to use today’s technology to recreate America’s favorite snacks with today’s moms and today’s kids in mind.

And it’s not just what’s in the bag that gets a makeover. The vegan snack brand also unveiled its new mascot: DJ_P, a “sassy” female DJ who will appear on PeaTos product packaging and compete against Frito-Lay’s Chester Cheetah when PeaTos vegan snacks hit stores in late March.

Jocelyn Martinez is associate editor at VegNews and lives in Los Angeles, California.

Subscribe to VegNews today and get our Best of Vegan issue for FREE!

Subscribe to VegNews today and get our Best of Vegan issue for FREE!

Will REI Membership Soar With Its New Lifetime Program? – RetailWire

Peletier seeks a post office for the west of Carteret; plans trash pickup along Highway 58 with Carteret Big Sweep | News