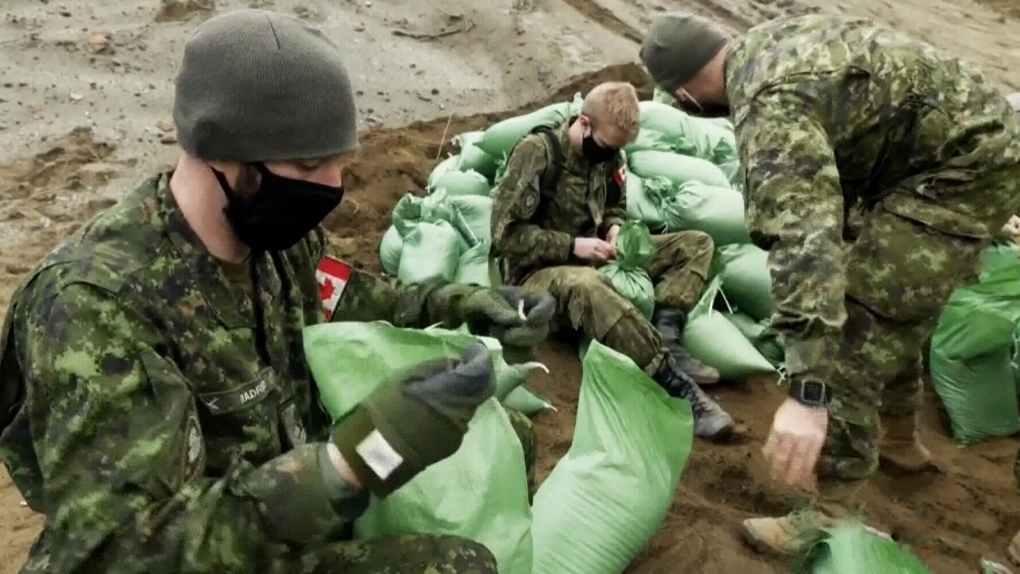 People have stepped up to help those affected by the devastating flooding in British Columbia in every way they can, with many local Fraser Valley volunteers stepping up to lend their support.

At the same time, communities in need are also receiving assistance from dozens of Canadian soldiers as part of a specialized operation in response to the emergency.

At Albert Dyck Memorial Park near Abbotsford Airport, community volunteers have been showing up for days to fill sandbags for those in need.

Co-organizer Mike Klein said on Saturday they had set up three stations in different areas and “over a hundred volunteers.”

“We just saw that there was a need and we just started doing it,” he said. “And honestly, we had no idea how big the need was.”

Klein said they had volunteers with trucks and trailers delivering sandbags to where they were needed.

“We sent trailers all day,” he said. “I think now, with the rain coming, people are getting a little more anxious. “

Volunteer Harj Hadani said she had friends in the hamlet of Arnold at the western end of Sumas Prairie who were “really touched”.

“I think fight or flight has kind of set in for them the last few days,” she said. “But now they realize that more rain is on the way. “

Many are focused on fortifying properties against future flooding, and volunteers hope their efforts will bring some peace of mind and protection to those living with the threat of flooding.

It is also the motivation behind the mission of dozens of Canadian soldiers now on the ground in British Columbia as part of a natural disaster response known as Operation LENTUS.

Lee said soldiers were also sent to the Chawathil First Nation community near Hope along Highway 7.

“We have also installed sandbags there, to provide a bit of support and fortification … by building sandbag walls in and around some of the buildings that are in this community,” said Lee. “They’ve had some flooding in the past weeks, now they’re worried about the second wave of the precipitation system coming on.”

“While water levels remain stable at this time, we have cleaned up these culverts with the goal of drastically reducing water levels in the Sumas Grasslands,” he said.

“We have about 150 soldiers (in British Columbia), that includes some of the command and control elements that you would see in a headquarters, so we have people integrated into the provincial emergency operations centers, who can provide liaison with various provincial government agencies as well as external agencies assisting in this disaster.

Lee said that among these, there are around 100 soldiers available to tackle tasks on the ground, including transporting needed supplies to any areas that need them. The Canadian Forces are also seeking to provide flood mitigation support to other First Nations communities in remote areas of the region.

“We are also looking at potential route clearance tasks,” said Lee. “This is what we do. We help Canadians when needed. We are deployed here to do all we can to be able to help provincial and local authorities sort this out.

At the Abbotsford bagging station, volunteer Eric Chawla said he and others have also started a group called the Kirpa Collective to help flood victims in British Columbia.

“We have raised funds through our friends and family, and we basically collect goods, donations,” said Chawla, adding that they had delivered supplies to the Fraser Valley and to isolated communities that were. isolated. “We had volunteer friends with their own helicopters, their own planes, and for free we were able to send so many things to help outlying communities.”

Klein said he has also created an online group to help people in flood-prone areas with repairs and reconstructions by connecting them with artisans offering their skills.

“We have welders, we have excavator operators, we have plumbers, electricians, gas fitters,” he said. “So once people get to a place where they can start to rebuild their lives, we have trained professionals who are ready to help them. “

Hadani said it was good to be able to help somehow.

“You feel almost helpless, and I think everyone in BC is in the same boat,” she said. “If there’s anything we can do to help protect homes from the new rain that’s coming, that’s all we want to do.”

How can our financial education influence our finances today?