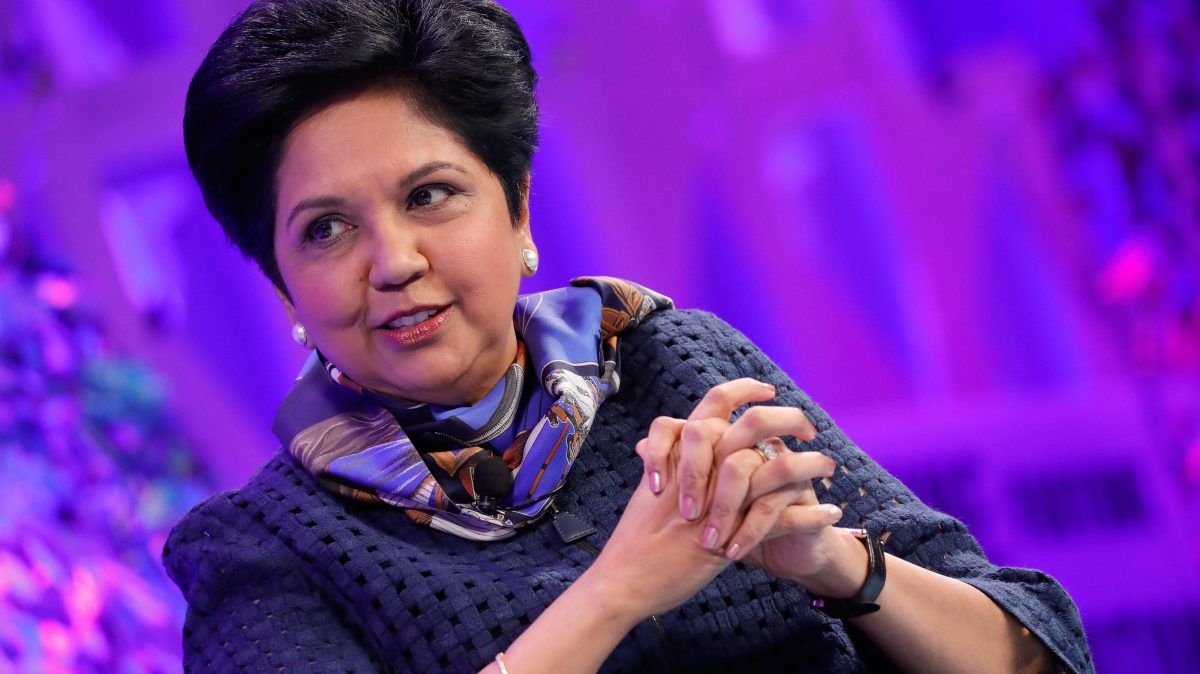 Former PepsiCo CEO Nooyi on “The Enigma of Work and Family”

Almost 50 years after the Washington Post’s Katherine Graham became the very first woman to run a Fortune 500 company, 8% of the largest US companies have female CEOs.

Indra Nooyi, the former CEO of PepsiCo who pushed for transformational change in the company through healthier product innovation, once belonged to this little club.

In a new dissertation entitled “My whole life: work, family and our future“, Nooyi looks back on his career and the challenge of balancing work and family. What follows is an excerpt from the book.

One foggy Tuesday in November 2009, after hours of meetings in Washington, DC, with two dozen American and Indian business executives, I found myself between the President of the United States and the Prime Minister of India.

Barack Obama and Manmohan Singh entered the room to take stock of our group’s progress, and President Obama began to introduce the US team to his Indian counterpart. When it happened to me – Indra Nooyi, CEO of PepsiCo – Prime Minister Singh exclaimed, “Oh! But she is one of us!

And the president, with a big smile and without wasting time, replied: “Ah, but she too is one of us!

It is a moment that I will never forget: the spontaneous kindness of the leaders of the two great countries who have given me so much. I am still the girl who grew up in a close family in Madras, South India, and I am deeply connected to the lessons and culture of my youth. I am also the woman who came to the United States at the age of twenty-three to study and work and somehow came to head an iconic company, a trip which, in my opinion, is only possible in America. I belong to both worlds.

Looking back, I see how my life is full of this kind of duality – competing forces that have pushed and pulled me from chapter to chapter. And I see how true it is for everyone. We are all in balance, juggling, compromising, doing our best to find our place, to move forward and to manage our relationships and responsibilities. It is not easy in a society which changes very quickly but which sticks to age-old habits and rules of behavior that seem beyond our control.

The twin requirements that define me have always been my family and my job. I joined PepsiCo in 1994, in part because the company’s head office was close to my home. I had two daughters, aged ten and a half at the time, and a husband whose office was nearby. PepsiCo’s job posting made sense, we thought, because the commute was short. I would be able to drive to school or home for the baby in fifteen minutes. Of course, that’s not the only reason I chose PepsiCo, an exuberant and upbeat company that I loved wholeheartedly from the moment I entered. I also felt that PepsiCo was a place open to the changing times.

It was important. I was a woman, an immigrant and a person of color entering an executive floor where I was different from everyone else. My career began when the dynamic between women and men at work was not the same as it is today. In fourteen years as a consultant and business strategist, I had never had a woman at the helm. I didn’t have any female mentors. I was not upset when I was excluded from the customs of male power; I was just happy to be included. But by the time I got to PepsiCo, waves of educated and ambitious women were pouring into the workforce, and I could feel the atmosphere changing. The competition between men and women was becoming more and more acute, and over the following decades, women changed the game in ways that would have been unthinkable to me at first. As a business leader, I have always tried to anticipate and respond to changes in culture. As a wife and mother of daughters, I wanted to do everything to encourage her.

As my career progressed and my children grew older, I struggled with the ever-present conflicts of motherhood at work. For fifteen years, I kept a whiteboard in my office that only my daughters could write on or erase. Over time, this painting was a heartwarming kaleidoscope of scribbles and messages, a constant reminder of the people closest to me and those to whom I truly belong. When I left my office, I kept a canvas print of his last iteration: “Hey mom, I love you very, very much. XOXOXOX. “Hang in there.” Never forget that you have people who love you! “Have a nice day!” “Hey mom, you are the absolute best! Keep doing what you’re doing!” exclaims the picture, complete with cartoon characters and images of suns and clouds, all in green and blue dry-erase marker.

As a high profile CEO, I have also been asked repeatedly to discuss work and family conflicts in front of a large audience. I once said that I wasn’t sure my daughters thought I was a good mother – don’t all mothers feel this sometimes? – and an Indian TV network produced a prime-hour one-hour talk show, without me, about what Indra Nooyi said about working women.

The twin requirements that define me have always been my family and my job.

Over the years, I have met thousands of people who care about how to be true to their families, their jobs and their ambitions to be good citizens. This commitment had a big impact on me; I learned and absorbed the details on a visceral level. I thought about how family is such a powerful source of human strength, but I realized that creating and raising families is stressful for so many people.

At the same time, I was part of a much vaunted group of world leaders, regularly invited to rooms with the most influential leaders on the planet. And I noticed that the painful stories of how people – especially women – struggle to mix up their lives and were totally absent in those plays. Titans of industry, politics, and economics have spoken of moving the world forward through finance, technology, and the flight to Mars. Family – the real messy, delicious, difficult, and precious core of how most of us live – was marginal.

This disconnection has profound consequences. Our inability to respond to professional and family pressures in the upper echelons of global decision-making prevents hundreds of millions of women every day, not only from rising and leading, but also from combining a fulfilling career with a healthy partnership. and a maternity ward. In a prosperous market, we need all women to have the choice to take paid jobs outside the home and that our social and economic infrastructure fully supports that choice. Women’s financial independence and security, so essential to their equality, are at stake.

More generally, ignoring the fact that the world of work is still largely skewed in favor of the “ideal worker” of old – a male breadwinner with no load – wears us all out. Men too. Businesses lose out because productivity, innovation and profit suffer when so many employees feel they can’t fully devote themselves to work. Families lose out because they are spending so much energy dealing with old systems, from reduced school hours to lack of parental leave or elder care, which does not correspond to their reality.

And, of course, the whole world community suffers. Many young people, worried about how they are going to handle it all, choose not to have children. Not only could this have dire economic consequences for decades to come, but, on a very personal note, I find this sad detail. With all that I have accomplished, my greatest joy has been to have children, and I wouldn’t want anyone to miss out on the experience if they want to.

Ignoring the fact that the world of work is still largely skewed in favor of the “ideal worker” of old – a male breadwinner with no load – wears us all out.

I believe we need to solve the conundrum of work and family by focusing on our infrastructure around “care” with energy and ingenuity like never before. We should take this as a boost, starting with ensuring every worker has access to paid time off, flexibility and predictability to help them manage the ebb and flow of work and family life, and then moving quickly to develop the most innovative and comprehensive childcare and childcare services. elderly care solutions that our greatest minds can design.

This mission will require leadership that we don’t see often. I think the fundamental role of a leader is to look for ways to shape the decades to come, not just to react to the present, and to help others come to terms with the discomfort of disruptions to the status quo. We need the wisdom of business leaders, policy makers and all the women and men passionate about lightening work and family burden to come together here. With a sense of optimism and an inescapable sense of responsibility, we can transform our society.

Transformation is difficult, but I’ve learned that with courage and persistence – and the inevitable give and take – it can happen. When I became CEO of PepsiCo in 2006, I crafted an extremely ambitious plan to deal with the underlying tensions in a business still entrenched in selling sodas and crisps. I knew we had to balance support for our popular Pepsi-Cola and Doritos brands with a full-blown effort to make and market healthier products. We have had to continue to supply stores and pantries with convenient and delicious snacks and drinks, but we have considered the environmental impact of this growth. We needed to attract and retain the best thinkers in their fields, but make sure PepsiCo was also a great place to work for a quarter of a million people. I called this mission Performance with Purpose, and for a dozen years or so, I weighed every decision against those metrics, making constant compromises to achieve a more sustainable and contemporary organization.

In the months leading up to my departure from PepsiCo in 2018, I reflected on how I would contribute in the years to come, knowing that I am part of a chain of women leaders who can help us move forward for them. generations to come. I got down to writing a book and insisted to everyone around me that it wouldn’t be a memoir. Instead, I thought, I would devote every ounce of my experience and my intellect to a manual for how we blend work and family.

The book you are holding is not this book.

First, I quickly found out that the research on work and family had been done. From all angles, around the world, arguments and ideas for supporting families – from maternity leave and early childhood education to multigenerational living – have been compiled, analyzed, noted and debated by brilliant minds. I didn’t have to repeat it all.

Secondly, everything I bring to this question, I know it now, comes from my own life in its entirety.