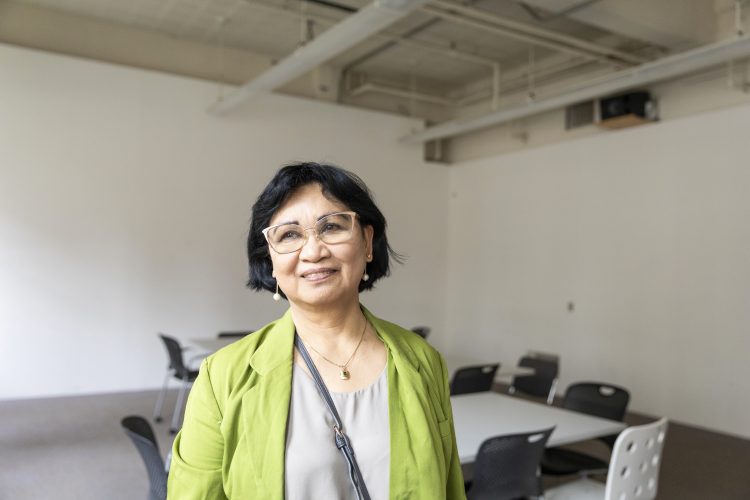 Guardians share their COVID experiences, show pride in their work in art exhibit

Elvi Olano has been a UW goaltender for 16 years. She and 15 other Guardians took part in an art exhibit called “(in)Visibility,” which hung in the UW Tower through March. Photo only permitted for use in promoting this story.Dennis Wise/University of Washington

Elvi Olano had only been working as a babysitter for a month when she had an experience she will never forget. As she was cleaning a bathroom, a teacher came in and yelled at her to stop her and the students around him from using it. When she apologized, he said, “You’re ridiculous.”

Olano, an immigrant from the Philippines, didn’t have strong English skills at the time, so she didn’t know what “ridiculous” meant – although she could tell he was angry by the tone of his voice. As the students watched her, she began to cry.

A friend helped her report the incident and the news was passed on to the department head. The president called a meeting the next morning to make it clear that such behavior was not acceptable. But for Olano, remembering the humiliation still hurts, 16 years later.

“They should respect us,” she said, referring to professors, students and everyone who benefits from her work.

The UW Custodian Project calls on the UW community to do just that. The volunteer-led effort, which is not affiliated with UW, advocates for Guardians, raises their voices and raises awareness of their important roles on campus. As part of the project, an art exhibit titled “(in)Visibility” hangs in the UW Tower through March. It presents photos taken by 16 guards, accompanied by their testimonies.

The UW Custodian Project was started in March 2020 by Evalynn Fae Taganna Romano, the daughter of two UW Custodians who earned her bachelor’s degree and master’s degree in social work and public health from UW. Guards continued to report for duty as the COVID-19 pandemic brought much of campus life to a halt.

Inspired by her parents — who dedicated nearly six decades to cleaning UW buildings — Romano brought food, coffee, hand-sewn masks and thank you cards to caretakers once a week, with support from friends, businesses and community organizations.

From there, the project evolved from a way of showing appreciation to including direct services and a broader advocacy effort. Many campus guardians are immigrants, refugees and people of color, groups often more vulnerable due to social and health inequalities.

“Guardians might not feel comfortable telling leaders face to face what they need, and I think it’s really important to think about how to create intentional spaces for them to do that” , Romano said. “UW has a responsibility to take action and structure policies that recognize the value and ensure the safety of their essential workers.”

For “(in)Visibility”, Gina Tabasan took a photo of her mask. She said: ‘How will it help if we don’t have the vaccine yet? How will it help if it gets wet? » Photo only permitted for use in promoting this story.Dennis Wise/University of Washington

Romano based “(in)Visibility” on a method she learned during her master’s studies in public health and later used for her thesis. Called photovoice, it incorporates the voices of community members into the search. She began recruiting participants for photography-based storytelling sessions in August 2020 to learn more about the health impacts of their workplace and home. She then asked the guards to take photos and organized group sessions with the guards to collect their testimonies.

The exhibit debuted in the Art Building in September 2021 — the building Romano’s mother has looked after since 1997 — with the idea that it would rotate to a different building on campus each term.

The photos, documenting the lives of guards on and off campus, reflect the times in which we live. An image titled ‘My Yellow Shield’ shows a Guardian’s cart. In the accompanying quote, the Guardian explains how cart cleaners protect us from COVID-19.

Gina Tabasan took a photo of one of the surgical masks she receives every day at work. “I was thinking, will this help us prevent COVID?” Tabasan said in an interview. “Or how will it help if we don’t have the picture yet? How will it help if it’s wet?”

Olano took a photo of his squash plant. She eats squash every day because “it’s one of the fruits that can be a vitamin for health” – something that has been particularly important to her as she seeks to protect herself from COVID-19 .

These photos capture the anxiety experienced by guards at the height of the pandemic. In addition to the worries they faced about the virus, some had to work a reduced schedule of three days a week and were given the option of taking time off.

“It was awful, it really was,” said a guard, who wishes to be identified by her initials. “We didn’t know what we were going to be exposed to. We had to do all that extra deep cleaning.

Another theme of the exhibition is the pride the guards have in their work. The photos show clean floors, guards at work or the machines they use.

“Being a keeper is not as easy as people think,” Tabasan said. “A nurse or a doctor, they save lives. We also save them, because without us the buildings are dirty. Students and staff can get sick. We are the army that protects you from garbage.

The photos also show things or practices that bring comfort, such as birds on campus or a walk during break. KP’s photo is a work of art with lines from a Native American proverb, reflecting his heritage: “Live strong like the mountains.” Walk as high as the trees. Be known by the traces you leave.

Unable to graduate from college herself, Elsa Tesfai says she enjoys being around students who are studying. Photo only permitted for use in promoting this story.Dennis Wise/University of Washington

Romano said his childhood was filled with memories of going to other Guardians’ homes with his parents. When she was a student, she came to lunch potlucks. Tabasan and Olano are relieved from work by taking breaks together, an activity that has been restricted during the pandemic. Many extend that sense of camaraderie to the UW community.

“I can’t speak for all of the Guardians, but I know many of them see the people on campus as family, especially the people they interact with,” Romano said. “Just like you would your family, they see it as their job to protect them and make sure they are safe and healthy.”

And sometimes people show that the feeling is mutual. Olano remembers a professor who offered to help him with the US citizenship test. Olano was afraid that he wouldn’t pass, but the teacher took the time to get to know her, which made Olano comfortable enough to try. The teacher then tutored her every day for three weeks.

“It was the happiest time I had here. I passed the citizenship test,” Olano said. “I can’t forget that.”

Caregivers interviewed for this story say they don’t always feel like the care they provide is returned — for example, when people throw trash on the floor. But there are also many who say hello and thank you, a gesture that the guards have all said they appreciate.

“I love being here. I love seeing all the faces. I love talking. I love saying ‘hi’ and ‘goodbye’,” Elsa Tesfai said. come to me as a human being. I feel so happy when they tell me their story, because they don’t just say, “She’s a babysitter.” Why do I have to talk to him?’ »

Tesfai came to the United States in 1991 as an East African refugee with two children. She went to community college but only for two terms. It was difficult to find daycare and she had to take a bus across town. Now she’s watching students pursue a dream that wasn’t available to her. The lack of connection with people on campus, along with the fear of COVID-19, is what made the peak of the pandemic so difficult for her.

“It was ugly because there was nobody here. Even though we were paid, I didn’t have peace in my heart,” Tesfai said. “I have to see them go to school. For me, if I don’t see them, I suffer.

“(in)Visibility” is on display in the UW Tower on the lobby level after the elevators until March 31.