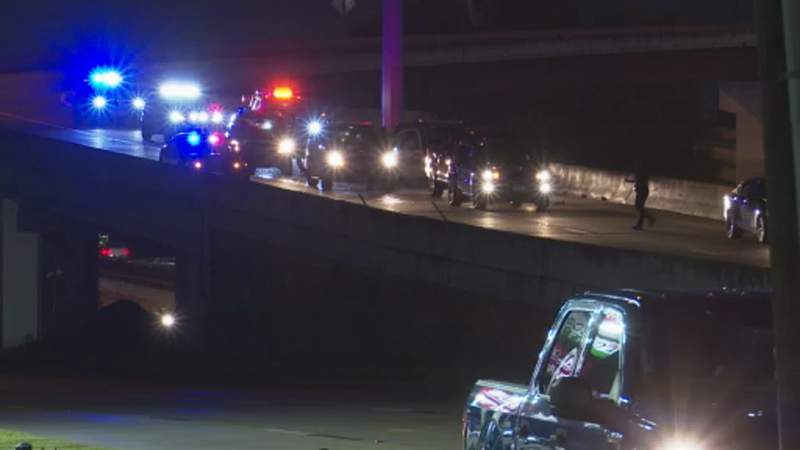 The officer was heading south on Beltway 8 around 9:30 p.m. Saturday when he noticed a vehicle with two occupants, a man and a woman, aggressively behind him, HISD chief Pete Lopez said. The officer attempted to reach Interstate 59 when the vehicle behind him attempted to pass him on the left and allegedly attempted to hit him against the concrete wall, according to Lopez. The officer slowed down and the other driver stopped in front of him, hit his vehicle’s brakes, got out of the vehicle and approached the officer’s vehicle with something in his hand, according to Lopez. The policeman got out of his vehicle, introduced himself as a policeman and drew his gun. It was then that the woman in the suspect vehicle got out and tried unsuccessfully to prevent the suspect from approaching the police officer. The suspect handed the woman something and she stepped aside as the man continued to approach the officer.

A physical struggle ensued as the officer had his gun in his hand and the suspect allegedly grabbed the gun and a shot was fired into the air, Lopez said. No one was touched by the round.

The suspect began to walk back and forth to his truck and approached the officer again. The officer attempted to handcuff him, but the suspect grabbed the handcuffs and threw them over the retaining wall, Lopez said.

Officers from the Houston Police Department arrived at the scene around 9:43 p.m. and took the suspect into custody.

The HISD officer is a nine-year veteran who has worked in the school district for two years, Lopez said.

HISD will conduct an internal investigation, according to Lopez.

HPD investigators said they believe alcohol may have played a role in the incident and officers are currently conducting a DUI investigation. HPD will refer the case to the district attorney’s office for charges.

“Not a beautiful look” without a mask on video – KXAN Austin