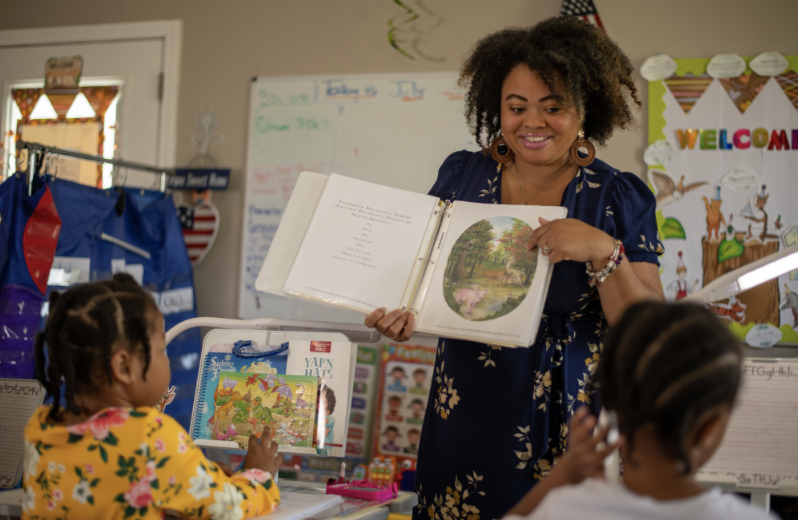 When it came to homeschooling her three children, Tegan Frazier of Montgomery, Alabama, wanted to make sure they got the attention they needed instead of being in a classroom with 20 other students or more.

Erica Kelly from Birmingham decided to homeschool her two school-aged children because she was missing most of their school achievement ceremonies and parent-teacher conferences due to her work schedule. She also wanted to make sure they got healthier food options.

With the fall semester slated to begin in many school districts this month, Frazier and Kelly are among a growing number of African American parents who have chosen to educate their children at home and not at school. school.

“I believe that public and private schools help children learn and grow, but those environments aren’t the best suited for my children’s growth,” said Frazier, who believes homeschooling allows him, her and her husband to guide their children’s learning and experiences.

According to a report by the Pioneer Institute, a public policy research group, “homeschooling is a viable alternative for the many students and their families who wish to opt out of traditional public schools. [because it allows for] parental choice and [supports] the belief that parents are best equipped to make educational decisions that affect their children.

Frazier said she and her husband, Iran Frazier, a military veteran who received a Purple Heart, can pass on their values ​​and beliefs to their family.

“I believe what the Bible says: ‘Train [children] the way [they] should go,” she said.

Frazier described each speaker as a true professional with references and helpful information to share with attendees. She also became familiar with home study programs and the different types of learning styles available to her and her children.

BHOB, co-founded by Yalonda Chandler and Jennifer Duckworth, is a community of homeschooled families with a “vision…to create a safe place for black and brown children to learn, play and grow,” according to the group’s website. Around 150 families are part of BHOB, with around 50 working people.

Duckworth has been homeschooling her three children for seven years.

“About four years ago, my neighbors [in Vestavia Hills, Alabama, saw my husband, Jeremy Duckworth, and I] school our children at home and asked me if I could teach their child,” she said, “At the time, the child was struggling in kindergarten, [and] I said, ‘Of course.’

Duckworth brought this student from failing to become the most improved student in his class. She thought that if she could do this for one student, she could help others. It was then that she founded Neighbor Foundations, in October 2019, which became a precursor to BHOB.

Chandler was unhappy with the way her children were being treated in a school system outside of Birmingham, so she posted on the Black Homeschoolers of Alabama Facebook site. She showed up and her kids with a flyer she created to invite black and brown moms to an outing to Explore Playground and Splashpad in Hoover, Alabama, where she would hand out cupcakes. About six families showed up, and it became the start of the BHOB.

“I didn’t realize I was starting a band,” she said, “I just wanted us to trade numbers to play dates and get together.”

Chandler met Duckworth met at rallies and gravitated toward each other. Eventually, they teamed up to form the BHOB.

“Yolanda and I hosted a conference last year, and we had a low turnout,” Duckworth said. “We had it in a local library and were grateful for it. We learned from our mistakes and made adjustments. For this year’s conference, I was amazed but not surprised.

Before finding the BHOB, Kelly was on the verge of dropping out and re-enrolling her children in public school. She felt isolated because her family did not support her decision to homeschool the children and she lacked community. Kelly described the 2022 BHOB Summit as informative and inspiring.

“I found the BHOB on Facebook,” she said. “When I first joined the group, I was very calm. …I just sat and watched all the homeschooler interactions. I missed so many events because I was a little nervous, but I finally made it [to an] event they held in a park, and I’m so glad I went.

Last fall, Kelly, 28, pulled her two children — JeQuayla, 12, and Jaylen, 10 — from public school to homeschool them. “I didn’t know what I was doing, but I learned it was a process,” she says. “I had to find my niche and figure out what worked for my kids and me.”

Kelly pulled her children out of public school due to labor disputes, as well as the lack of nutritious food provided to students during the school day: “Public schools just don’t serve healthy meals,” he said. she declared. “I want to control what my children are exposed to and I want to spend more time with them.”

Kelly describes the difficult transition from public school to homeschooling at first. JeQuayla transitioned well as she was attending school virtually from home before being homeschooled. Jaylen, however, is more of a hands-on learner and is very active.

“It was very difficult to keep [Jaylen] focused,” said Kelly, who realized she was trying to homeschool her kids using the public school model, which wasn’t working.

The public school style of teaching thwarted the goal of removing the children – Kelly wanted them to be comfortable while learning and not feel pressured.

Participate in the BHOB Summit 2022.
“I started the day [of the event] I felt tired and would have preferred to be in bed, but I sat up in different sessions and thought, “I was supposed to be here,” Kelly said.

She left the Summit filled with so much new knowledge that she could implement at home with her children regarding teaching styles and activities outside of her home.

When Frazier traveled to Bessemer from Montgomery for the BHOB summit, she thought it wouldn’t be a waste of time: “I [knew] it would be very beneficial for me and it did not disappoint me,” she said.

By being part of a homeschooling community, Frazier has access to resources and knowledge about homeschooling, such as grants, scholarships, and online opportunities for homeschoolers.

“Events like [the 2022 BHOB Summit] give families the opportunity to learn and gain experience from other mothers, as well as interact with other homeschoolers who can push you to learn more,” she said. declared.

To respond to needs

Frazier, 37, homeschooled his 6-year-old twins, Israel and Isabella, and 3-year-old daughter, Iliana, for three years. At home, she is able to isolate their respective needs and focus on directly assisting each. She says the three have different learning styles and she is able to meet each of those needs. She teaches her children at a pace that suits the entire household while meeting the physical and mental needs of the family.

Another benefit of homeschooling for Frazier is that she and her children get out of the house to discover and explore nature.

“We attend library events, lunches, trips to various places, museums and nature adventures to develop their intellect,” she said, adding that being having the BHOB is crucial for families like hers.

“It is essential for me to have a community of students at home [because] we don’t have a lot of family here,” Frazier said. “People think family is just your blood, but to me family is who is part of your tribe. BHOB is part of our tribe.

“For kids, having a community allows them to be around other kids, to build friendships with other homeschoolers,” she added. “The journey of learning never ends.”