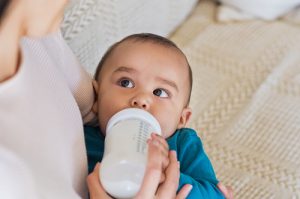 On October 22, the US House of Representatives voted 276-149 to approve a bipartisan bill introduced by US Representative Jaime Herrera Beutler (R-WA) that would extend workplace protections to nearly 9 million employees excluded from the Breaks Act of 2010 who breastfeed their children.

“I’m glad the House has approved this bipartisan, business-friendly legislation – endorsed by leading trade associations like the United States House of Congress and the National Retail Federation – which simply provides moms with reasonable opportunities to pump at their workplace, ”Herrera said. said Beutler.

The Provision of Urgent Maternity Protections (PUMP) for Breastfeeding Mothers Act, HR 3110, which Representative Herrera Beutler co-sponsored in May with U.S. Representative Carolyn Maloney (D-NY), sponsor of the bill, would expand it. requirement that employers provide certain accommodations to cover salaried employees and other types of workers not covered by current law, according to the summary of the congressional bill.

Additionally, time spent expressing breast milk should be counted as hours worked if the employee is also working, the summary states.

In addition, HR 3110 would extend the period of time available for such accommodations from one year to two years, among other provisions.

“As a mother of three young children, I understand the challenges faced by breastfeeding mothers who are also employed,” said Representative Herrera Beutler. “Ensuring mothers can pump at work promotes healthier families, and it’s also important to help businesses recruit and retain the workforce they need. “

“I am proud to have worked with businesses, healthcare stakeholders and parents to successfully carry out this legislation that supports Southwest Washington moms who are ensuring the health and financial security of their families,” said declared the member.

If enacted, the measure would strengthen the 2010 Break Time Act by closing the coverage gap and expanding the protections in the 2010 Break Time Act to cover categories of employees currently exempt from protection. , such as teachers, software engineers and nurses, according to a summary of the bill. provided by the staff of Representative Herrera Beutler, and would provide employers with clarity on when pumping time can be unpaid, as permitted by current law.

On Monday, HR 3110 was received by the US Senate, which in May put the identical bill, S. 1658, on its legislative agenda for action.

EDITORIAL: Raise your hand and volunteer