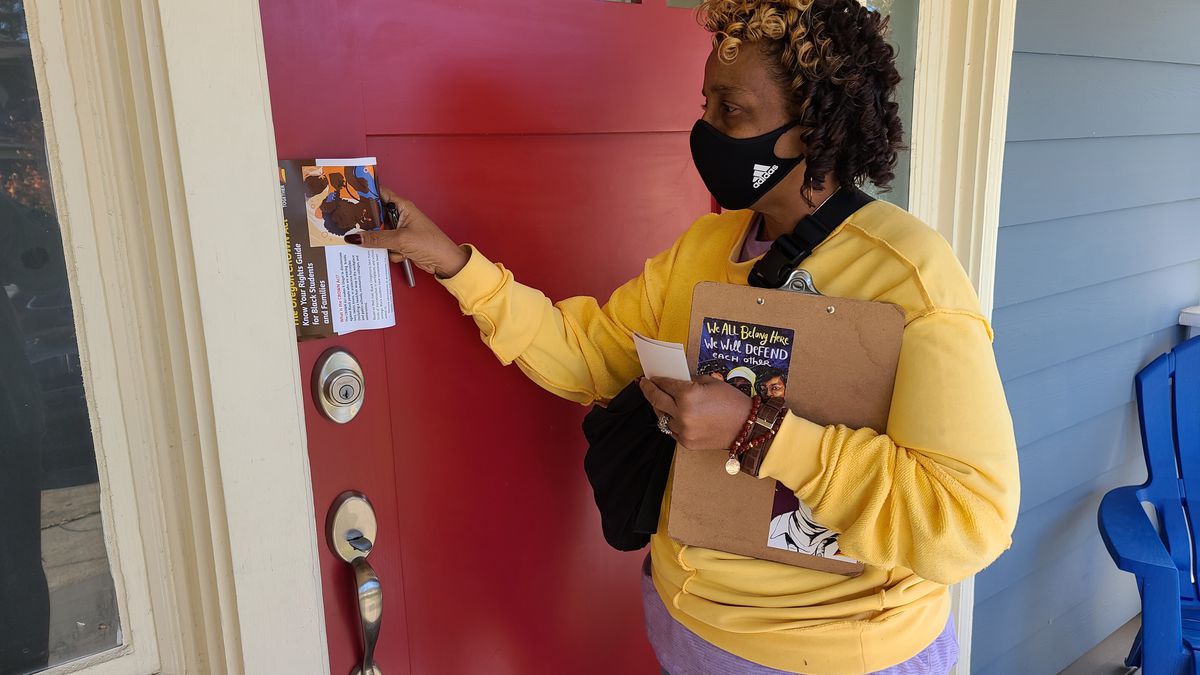 In just over a month, a new Oregon law will come into effect, making it illegal in Oregon workplaces and educational institutions to discriminate against black people for their hairstyles.

And instead of celebrating and calling it a day, supporters of the law are working statewide to make sure people know what has changed and why.

LaNicia Duke has lived in Tillamook County on the Oregon coast for seven years. In the past, she’s noticed legislation that seems to have Portland in mind, and not relevant to her community. But the recently approved CROWN law is different, she said. And when she heard about it, she wanted to get involved as both a rural Oregon woman and a black woman.

â€œIt’s very relevant to people,â€ Duke said. “But I also think we need to stop making laws without educating people on why.”

Duke is part of an effort in a number of Oregon communities to raise awareness about the CROWN Act.

The bill seeks to protect blacks in Oregon from discrimination for wearing braids, twists, protective hairstyles, headwear or accessories in their hair. By law, people who believe they have experienced hair discrimination based on race can file complaints in schools and workplaces.

But advocates say there is still a lot of work to be done before January 1 and even after the bill comes into force.

First, there are the state’s rules and policies that must change in order to adhere to the new law. Last month, the State Board of Education conducted a first reading of rule changes and proposals that are expected to occur under the new law. The rule revisions include the addition of a description of “protective hairstyles” and the change in language regarding the application of the dress code. Passing the CROWN Act also means creating a new rule to prevent school districts from becoming members of organizations that do not have “equity-focused policies.”“

These draft rules could still change before a second reading in the future.

Second, there’s the work to get the word out across Oregon about what the bill means for students, families, and school leaders as the CROWN Act comes into force.

Forward Together, a group that campaigned for the CROWN Act, is leading this work in Portland. At a recent canvassing event last month, they knocked on doors in northeast Portland to share a Know Your Rights guide to the CROWN Act.

Campaign volunteer Rae Dunnaville was one of that group. Speaking to people on the street, she said some knew the law, but didn’t know it had been passed.

“What has become clear to me is that there is certainly a lot more community education that we need to do to make sure our community knows this has happened, and now we have that layer of protection. additional, â€Dunnaville said.

In addition to students and education workers, Dunnaville also wants to spread the word to hair and beauty salon owners, so they can share the news of the law with their customers.

California, neighboring southern Oregon, was the first state to pass the CROWN Act in 2019, with several states and cities across the country following suit with similar bills. Oregon House passed the CROWN Act in 2020, but died in the Senate at the end of a chaotic session. He finally made it to Oregon in June. According to the CROWN Act coalition, a group of national organizations, a total of 14 states have passed similar legislation, including Washington.

Outreach is also taking place outside of Portland. Forward Together Oregon field organizer Emma Martinez said the group has started partnering with Unite Oregon to reach students in Rogue Valley, and the group is working with LaNicia Duke in Tillamook County, who builds a network for black people living in rural Oregon. .

In rural Oregon, explaining the CROWN Act is also listening and teaching

Across her community, Duke said she was working to listen to questions about the CROWN Act and understand how people in other states with similar legislation handled implementation.

In rural Oregon, where schools may have small numbers of black students, she wants to make sure everyone – from school administrators to students – understands why the CROWN Act exists and what it’s for.

â€œWe will be asking school districts, which may have fewer than 10 black children across their school district, to be concerned about this CROWN Act, without explaining why,â€ Duke said.

She wants to help explain the why, for schools, and especially for students.

â€œI think it’s important for black students in our state, no matter where they live, to know that they have support,â€ she said.

Duke also wants to share information with students and families who may have nothing to do with CROWN Law, or unfamiliar with protective hairstyles, or why it is wrong to change a black student’s hairstyle without their consent.

“It’s really shameful, I think, that we are having these conversations in 2021, but I also know that there is still a lot of lack of knowledge and ignorance, sometimes voluntary, but sometimes not, in not understanding the differences culturally, because who teaches us this stuff? â€

She said it doesn’t mean excusing ignorance or bad behavior, but correcting it.

â€œWe have to get to a place where people just respect each other,â€ Duke said.

When it comes to when the legislation was successfully implemented in Oregon, it will likely be difficult to say. Organizers and volunteers say there will be no metric or statistic that will show this bill works.

For Martinez, success means understanding: that school communities understand and can better support Black students, and that Black students and their families know about the CROWN Act and the rights the law provides.

“We will know that we have been successful … when schools and school districts follow the appropriate procedures and policies in cases of discrimination and there is a cure for black students and their families,” Martinez wrote in an e- mail to the OPB.

For Rae Dunnaville, she no longer wants to see stories in the nationwide news about students getting into trouble or being prevented from attending school activities because of their hair.

â€œNot because it’s not covered, but because it doesn’t happen anymore,â€ she said.

Like Martinez, Duke and Dunnaville want to raise awareness as January 1 approaches.

â€œThis is very important, because how we present ourselves in our lives really matters, how we are seen matters, how we feel about ourselves matters. I think this law is a step in the right direction to ensure black people have the ability to just be who we are. “