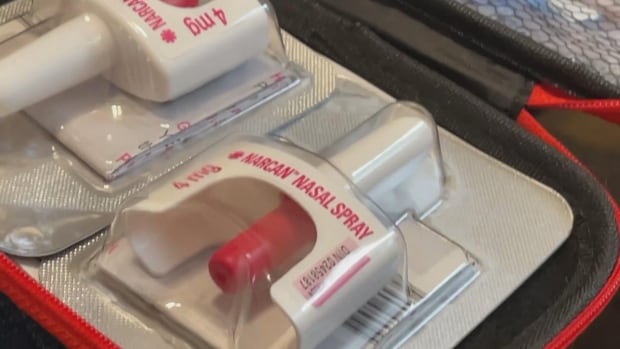 Conversations about drinking were common at Alexandra Ewanyshyn High School in Calgary.

They had guest speakers, open dialogues and received advice such as “drink lots of water”, “make sure to eat dinner”, “don’t get behind the wheel of a car”.

Now a student at the University of Calgary, Ewanyshyn looks back on those days and wonders if similar conversations about opioids and drug use might have helped her friend Liam, who she says died after an overdose in 2019.

“His passing was something that I felt very unprepared to understand,” she said.

“I really had no knowledge in high school about substance use…and what addiction looks like, especially in young people or in any of my peers.”

Because of his experience, Ewanyshyn supports the Advanced Coronary Treatment (ACT) Foundation’s efforts to add more drug use education to Canadian high schools.

The organization already offers CPR and automated external defibrillator (AED) training in more than 1,800 high schools across the country.

Today, the ACT Foundation launched a new program – “Opioid Overdose Response Training” – which it hopes to offer to complement its existing training and roll out in the fall.

The training is first given to the teachers, the idea being that they pass on the knowledge to their students. He will explain what opioids are, how to recognize the signs of an overdose, and how to use nasal naloxone, a drug that temporarily reverses the effects of opioid poisoning or overdose.

“The majority of students said that after learning to use the naloxone nasal spray, they felt they could use it in an emergency if it was available,” said the ACT Foundation’s executive director. , Sandra Clarke, in an interview on Alberta at noon.

“Training in the use of the naloxone spray just adds another vital skill…so it’s really about empowerment.”

So far, neither the Calgary Board of Education (CBE) nor the Calgary Catholic School District (CCSD) have registered to receive the free training.

A CBE representative said he was looking forward to discussing the program with the ACT Foundation. Another CCSD member said future health and safety programs could include opioid training.

To fill the void, Ewanyshyn and two of her peers have already launched their own platform called The Liam Project – a social media-based initiative created in memory of their friend.

It aims to de-stigmatize substance use and encourage safer practices, focusing its messages on young adults.

“Learning more about harm reduction was a way of dealing with my grief and trying to understand it better, which translated into a desire to make positive changes,” Ewanyshyn said.

“The uncomfortable truth is that teenagers use drugs…but because of stigma and shame, they may hide their use and thus increase their levels of harm.”

Overdoses and deaths are on the rise

Young Canadians aged 15 to 24 are the fastest growing population requiring hospital care due to opioid overdoses.

Patrick Black has used naloxone hundreds of times in an attempt to reverse overdoses. He is a nurse and overdose prevention lead with Boyle Street Community Services, which supports people experiencing homelessness and poverty in Alberta.

“What we see in a lot of substances these days, very small amounts can cause an overdose quite quickly,” he said.

Black added that the timing couldn’t be better to provide opioid overdose response training to high school students, so young people are prepared for an emergency.

“It’s just about preparing young adults for the real world and trying to make them as good as they can be in real-life situations,” he said.

Alberta at noon52:40Naloxone kits and teenagers

Should high school students be trained in the use of naloxone?

And for parents who might think wearing naloxone enables drug use, Black said, in his experience, it doesn’t work that way.

“Honestly, I’ve never met a single person who thought it would be a good idea to start using substances just because there’s a naloxone kit lying around.”

According to Dr. Bonnie Larson, a family doctor in Calgary who leads a group called Street CCRED, which works to reduce the stigma of addiction, one of the barriers to using the kits may be access to them.

Although the province offers free injectable naloxone kits at some pharmacies and community sites, the nasal spray is not widely available. This is the version that the ACT Foundation will show how to use in their training.

“It’s actually a little intimidating for people who’ve never handled a needle or syringe before, but it’s not complicated.”

The good news is that giving naloxone to someone who doesn’t overdose won’t hurt them, she said.

Overall, Dr. Larson is a fan of the training and wants to see it added to high school programming immediately. She hopes it will include the views of people with lived experience.

“There are thousands of people around who can tell their stories of having had a drug poisoning event and what it was like for them,” she said.

“We are all unfortunately going to have to do more than before to care for and protect each other.”

Ewanshyn is doing his part by protecting his peers through his advocacy.

She hopes these kinds of conversations will be normalized, so that in the future, young people will be better prepared to act in an emergency or even just talk with a friend.

“I think it would have also helped me understand how I could have been more supportive or understanding just by discussing drugs.”