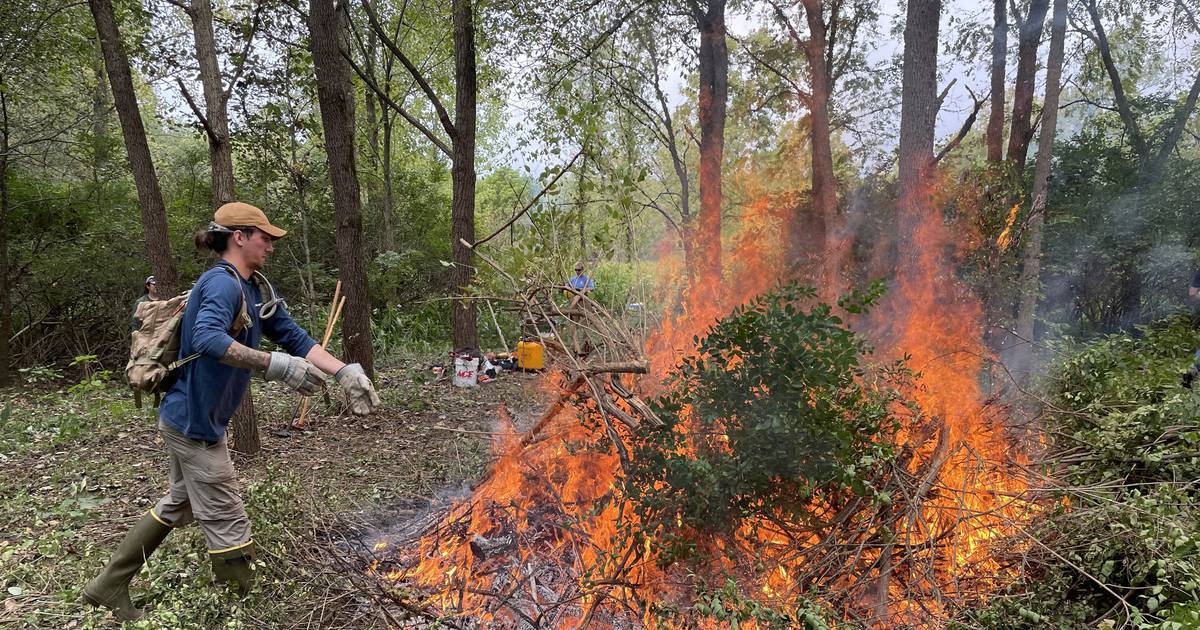 Conservation and enjoyment – these are the two things National Public Lands Day seeks to promote in outdoor spaces on the fourth Saturday in September each year. And the Will and Cook County Forest Preserves saw both in abundance this past weekend.

The Will County Forest Preserve District marked the occasion one day late last Sunday with fresh air and exercise at LaPorte Road Access of Hickory Creek Preserve in Mokena, where volunteers focused on controlling brush and waste disposal.

Emily Kenny, volunteer services supervisor, said the district used to partner with businesses at sites in Joliet and bring in entire businesses to help, but those efforts have been scaled back during the pandemic.

They chose Hickory Creek Preserve this year because it’s one of the largest sites and can accommodate large numbers of people to attend, Kenny said. Volunteer Day attracted around 40 volunteers, whereas typical catering events rarely have more than 20 people.

“We’re able to accomplish a little more than just our normal catering in a small place,” Kenny said.

Sunday jobs consisted of cutting, transporting and burning invasive trees and shrubs. Several regular volunteers who are chainsaw certified cut down some of the larger invasive species, while other volunteers moved them to burn piles. People allowed to spray herbicides on stumps to prevent vigorous shrubs from growing back.

“We specifically target species that are not native to our continent,” said Barbara Sherwood, restoration team leader and volunteer district liaison. “It enters and invades the understory of our forests and moves into our grasslands.”

Mark Bettin, a volunteer from Mokena, said it can be rewarding to see space open up in the reserves. Typically, when teams start out, they work in tight spaces. At the end of the day, birds such as woodpeckers, red-tailed hawks and owls may return to the area.

“We’ve had a lot of good public work days here,” Bettin said. “A lot of things have been cleaned up. It really pays off.

Andrew Fleisleber of New Lenox also joined the Public Lands Day effort. He works as a sustainability intern at Joliet Junior College, with the intention of going into restoration ecology.

“I try to get in as many days of volunteer work as possible,” Fleisleber said. “I love coming here and eliminating invasive species. Afterwards, you can see what you’ve done for the day, and it’s a lot more open and a lot more natural too.

Some people have chosen litter picking around driveways and pavilions instead of brush removal or have switched between tasks because the latter can be hard work over long periods of time, according to Kenny.

Kim Carter of Mokena and her daughter Tatum focused on morning trash removal, cleaning food wrappers, liquor bottles and even a full hot dog along the drive into the Hickory Reservation Creek. They said they liked being there to help.

“It’s peaceful,” Kim Carter said. “It’s kind of fun to see what you get out.”

News from the southern suburbs delivered every Monday and Wednesday

“It makes a big difference,” Sherwood said. “We have very limited resources on the staff side. Bringing in volunteers and community members, and also getting their buy-in and support from within the reserves, it just allows us to do more and more. We are really grateful to have volunteers. I feel really lucky to be able to work with them.

Kenny noted that the district holds habitat stewardship mornings every week throughout the year, but tries to cover the entire county with these, so volunteer opportunities shift. Opportunities are usually listed on reconnectwithnature.org.

But those in the Mokena area are lucky because Hickory Creek is active with a large community of volunteers, Kenny said. Thus, efforts are held there almost monthly, with the next scheduled for the day after Thanksgiving as a Work Off the Turkey initiative.

“If you’re local to that area, there are regular opportunities,” she said.

Bill Jones is a freelance journalist for the Daily Southtown.

Get Payday Loans No Guaranteed Approval No Credit Check