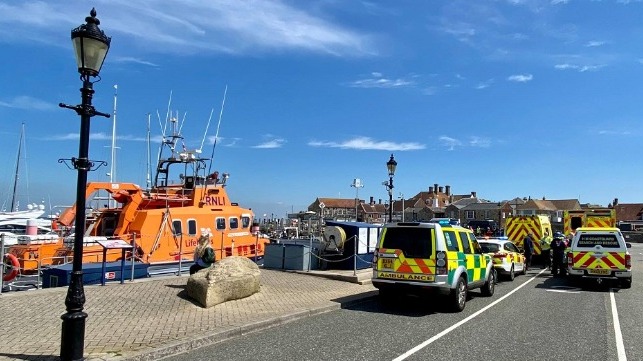 At approximately 10:45 a.m., the Yaramouth Severn-class all-weather lifeboat was called into action by the HM Coast Guard to evacuate two children with head injuries.

The volunteer crew quickly headed east out of Yarmouth harbor to meet a Royal Naval patrol vessel, HMS Tidy. the Tidy the crew had rescued two adults and two children who had been on board a high speed RIB excursion boat; the children had been injured in a wave.

The individuals were quickly transported from the HMS Tidy RNLI Severn Class Lifeboat and taken to Yarmouth Harbor where they were greeted while waiting for ambulances and paramedics.

The accident followed shortly after a warning from the UK Marine Accident Investigation Branch (MAIB) regarding the safety of high-speed rigid inflatable boats. In August, a 15-year-old passenger died when a high-speed RIB tour boat was fitted with a buoy on Southampton Water.

“These rides [commercial tour experiences] can provide excitement, entertainment, and fun, and for this reason, they are popular. . . [But] I would like to remind operators that they also have a duty of care to their passengers and that safety should not be compromised in search of a thrill, ”warned MAIB Chief Inspector Captain Andrew Moll (RN).