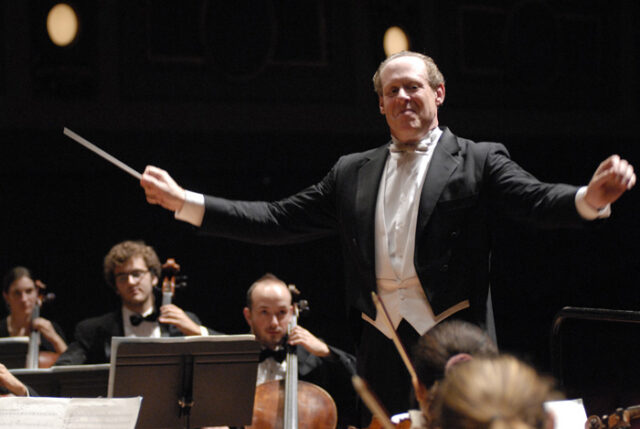 The School of Music, Theater and Dance has launched a 10-year project to commission 10 new orchestral works by black composers.

Established in 2020 by Grammy-nominated conductor Kenneth Kiesler, director of college orchestras and professor of orchestral conducting, the Initiative for Black Composers will commission a new orchestral composition each year for the duration of the project.

These new works will be created and recorded with the aim of expanding the classical orchestral repertoire and bringing out important new artistic voices.

The Black Composers Initiative will contribute significantly to SMTD’s longstanding practice of commissioning and performing works by a range of compositional voices, including women, black Americans, and other underrepresented artists.

Each composer will collaborate with SMTD students during the process of bringing the new work to its first performance and recording. The initiative will also create a framework for cross-disciplinary collaboration and explorations both within SMTD and in other UM schools, colleges and programs.

In designing the project, Kiesler sought to increase the representation and recognition of black composers as well as provide today’s students with a broader and more diverse repertoire. He felt it was important that this repertoire include not only existing works by black composers, but new pieces that deal with what contemporary composers “want to communicate now”.

Kiesler noted that he envisions “creating an initiative that will have a long-term impact. We plan to record all of these pieces for wide distribution, and we hope to help orchestras broaden their view of programming so that these works fit into the fabric of their regular repertoire.

The Black Composers Initiative is the product of SMTD’s commitment to fostering diversity, equity and inclusion in its climate and programs, and to inspiring more diverse representation in the performing arts landscape. .

“The School of Music, Drama and Dance is honored to not only celebrate the work of black composers, but to play a role in making the classical music repertoire more representative and inclusive,” said SMTD Dean, David Girer.

“I am especially delighted that the Black Composers Initiative is providing SMTD students with much-needed exposure to living composers, an essential part of any music curriculum. This initiative is part of SMTD’s broader commitment to elevate and promote BIPOC’s voices in the performing arts.

Three compositions have been ordered to date. The first, “Tethered Voices”, was originally recorded on video in September 2021 but will have its first live performance in front of an audience at UM on April 6.

Composed by SMTD alumnus James Lee III, this eight-minute work for narrator and orchestra is the setting to music of a new poem of the same name by poet and bandleader Kalena Bovell.

The second commissioned work, “Tales: A Folklore Symphony,” is a 20-minute multi-movement work by SMTD graduate Carlos Simon based on African American and African folk tales.

This work will be premiered by the UM Symphony Orchestra on January 26 at the Hill Auditorium, in a program that includes “Voices Shouting Out” by Nkeiru Okoye and “Negro Folk Symphony” by William Dawson.

The third composition is a concert work by Nkeiru Okoye for orchestra, choir, four vocal soloists and speaker. This commission was made possible thanks to the support of David A. Feldman and Roni Jacobson.

The work is inspired by the writings of and about Maya Angelou and will be premiered by UMSO and University Choirs, conducted by Kiesler, in the spring of 2023. Okoye described it as a work that “celebrates the spirit of transcending expectations and turn adversity into triumph. It is a testament to the resilient legacy that can come from people once rejected by society.

Kiesler’s hope is that the Black Composers Initiative will help catalyze change in the world of music education and performance.

“I see our role as educating our students to be citizens, beyond being musicians and by being musicians,” Kiesler said. “We want them to realize that they can be ambassadors or disciples of the arts beyond a very narrow repertoire, honoring tradition while advancing that tradition by amplifying new voices.”

Are payday loans a bad idea?