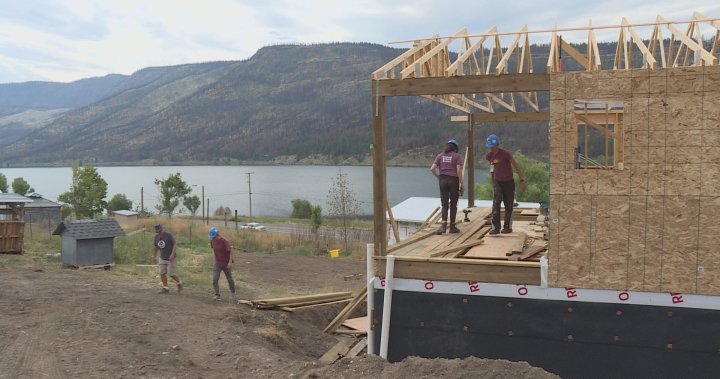 Since the spring, volunteers from across Canada have traveled to Monte Lake, British Columbia, to help some of the families who lost their homes in the massive White Rock Lake fire last year.

The effort is coordinated by Mennonite Disaster Service.

The charity is building four homes for North Okanagan fire victims, three in Monte Lake and one near Vernon, in less than six months.

For Dustan Eager, a resident of Monte Lake, it’s a bit surreal to see a new home for his family being built.

After losing their home last summer, with only partial insurance coverage, it didn’t look like they would be able to rebuild.

Eager said without the Mennonite Disaster Service, the family of five probably wouldn’t have been able to stay in Monte Lake.

“We probably would have ended up selling and having to move to somewhere we could afford because, right now, with the cost of everything, we couldn’t have done otherwise,” Eager said.

Volunteer project coordinator John Sawatzky said the charity, which regularly rebuilds homes for people affected by natural disasters in the United States and Canada, came at the request of the local community.

Residents in need asked for help with their reconstructions.

“We’re looking for a real need…and that they don’t have the ability to recover on their own. Usually we work for underinsured or uninsured people, so they have no way of raising money to rebuild a house,” Sawatzky said.

Owners contribute what they can and skilled trades people are hired to do the more technical work, but the basic construction and finishing will all be done by hundreds of volunteers who come from other parts of Canada, and sometimes from the United States, to help.

“It’s just a joy to work here and help out. Seeing hope return to people’s lives is more than enough reward for me. I look forward to the day when I can see them move into their new home,” Sawatzky said.

‘We do everything ourselves’: Monte Lake residents feel abandoned by White Rock Lake fire

Eager’s family is looking forward to this as well.

The father-of-three says even watching the reconstruction gives his children stability.

“They are extremely excited. When the crews are done at the end of the day, they want to sneak in and take a look. They already knew which rooms were theirs on the ground floor and were already making plans,” Eager said.

The plan is to be completed construction by the end of October.

For Eager’s family, after more than a year of temporary living situations, it would mean a lot to be back home this winter.

“[It would be the] best Christmas ever,” Eager said, wiping away a tear.

“That would be just amazing.”

The project is always looking for additional volunteers to participate. More details can be found on the Mennonite Disaster Service website.