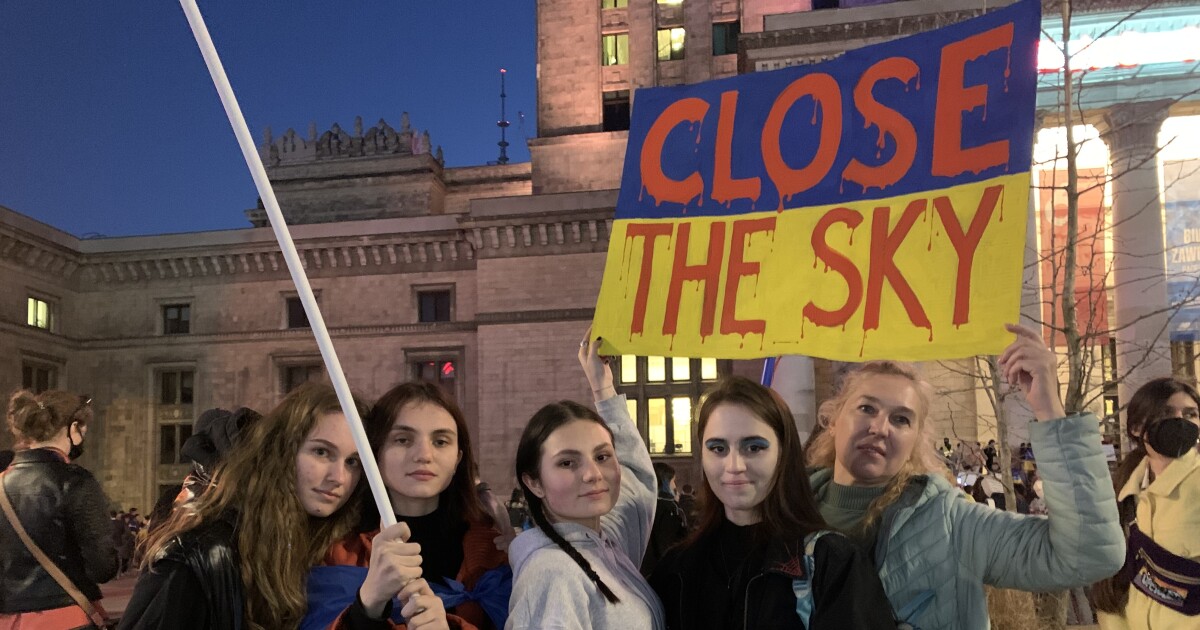 WARSAW – A group of Ukrainian teenagers marked President Joe Biden arrival in Poland by joining a demonstration to demand NATO will intervene to stop Russian air and missile strikes against their country.

The young women protesting are just a few of the millions of women and children allowed to leave Ukraine as martial law forces their male relatives to stay home and bombings prevent countless others from leaving. Russian President Vladimir Putin claimed the military campaign was necessary to protect Russian speakers, but the aggression caused these Ukrainians to develop a distaste for the Russian language, anxiety for their relatives and compatriots, and disappointment with Western powers, which have not declared a no-fly zone despite calls from Ukraine.

INSIDE A VOLUNTEER EFFORT TO HELP UKRAINIAN WAR REFUGEES IN POLAND

Sonya came to the Palace of Culture and Science with her older sister, Masha, a university student in Poland who attended the protest with her roommate and the roommate’s mother. As they described their father’s work as a medical volunteer in Kyiv, another young Ukrainian woman, Marusya Drahomyrova, joined the crowd and provided the occasional missing word in English. Their comfort with each other belied the fact that they had never met.

“I hope I will [be their friend]because the girls here,” she said, pointing to Masha and Sonya, “are just wonderful.

The young Drahomyrova had mentioned earlier in the evening that the Russian language is “offensive” to many Ukrainians because it is “the language of the aggressor”. His mother chose to speak Ukrainian rather than Russian during the interview with the Washington Examiner.

“We want them to close the skies or give us weapons, planes, [so] that we can do it ourselves,” Drahomyrova’s mother, Inna, told the Washington Examiner, in a video call after Friday night’s protest. “So right now Ukraine is very strong in their hearts, in their minds. But we don’t have the plane or the ammunition.

Ukraine is not a member of NATO and therefore cannot invoke the collective defense provision of Article 5 at the heart of the alliance. Biden and other NATO leaders have refused to impose a no-fly zone because it would force allied forces to shoot down any Russian planes that challenge the policy and possibly target Russian anti-aircraft batteries out of fear they do not shoot down Allied warplanes.

“We have a responsibility to ensure that this conflict does not become a full-fledged war between NATO and Russia,” NATO Secretary General Jens Stoltenberg told reporters after the leaders’ meeting on Thursday. statement of the alliance this week, explaining why the alliance will not be sending peacekeepers to western Ukraine. “And that’s also why the allies have said that we will not deploy troops on the ground in Ukraine, because the only way to do that is to be ready to engage in full conflict with the troops. Russians.”

Instead, US and European officials provided much of the anti-tank and anti-aircraft arsenal that Ukrainian forces used to cripple Russian supply lines and armored vehicles while pushing back against Ukrainian President Volodymyr Zelensky’s remarks. . demand that NATO allies in possession of MiG fighter jets, such as Poland, transfer the warplanes to the Ukrainian army to strengthen their air power.

“We also provide lethal weapons, advanced systems, as well as systems that help them shoot down aircraft and attack battle tanks with anti-tank weapons, and many other types of systems, including drones,” said said Stoltenberg. “At the same time, we have a responsibility to prevent this conflict from becoming a full-fledged war in Europe, involving not only Ukraine and Russia, but also NATO allies and Russia. It will be more dangerous and more devastating.

Biden’s team opposite a Polish plan to hand over more than two dozen MiGs in part because U.S. and Polish officials fear the gift could provoke a Russian counterattack on Polish territory. Pentagon officials have hinted that Ukrainian forces were unable to make full use of the “mission-capable aircraft” already in their possession.

“We haven’t seen them using these planes to the extent one would suggest,” Deputy Defense Secretary Mara Karlin said. Recount a Senate panel earlier this month.

The Bondars and Drahomyrovas, appalled by the Russian onslaught, are more moved by what they see and hear from family, friends and Ukrainian officials.

“We are all grateful to the volunteers and to the Poles who help the citizens of Ukraine, because it is really – they help a lot in every way, such as with money and giving us food, housing, clothes,” Sonya said at the protest. “It’s really good for us because someone doesn’t have clothes because someone left their house when it started. So we’re all very grateful.

This gratitude coexists with the horror of the attacks and the anxiety of their loved ones who remained in Ukraine. Marusya Drahomyrova said she “just moved [the] wife of my family in Poland,” where she said eight of them now live in a Warsaw apartment supported by her work as a software programmer.

“I work remotely,” she said. “Our customers are Americans, so they always need our help.”

Masha, in her third year studying in Poland, was able to provide a rallying point for her mother and sister. They speak with their father every day if they can.

“But it’s very stressful, because every day in different neighborhoods they shell our civilian homes,” Masha said. “I’m very scared to like going on social media and seeing if my house [was bombed].”

She turned her thoughts to the East, where Russian forces waged a major bombing campaign against Mariupol, a valuable port city on the Black Sea.

“I have a lot of friends from all over Ukraine, from Mariupol,” Masha continued. “And Mariupol is in such a blockade that it cannot be described in words. So yes, it’s very stressful, stressful for us.

Drahomyrova said she had an aunt in Mykolaiv, a town which Russian forces unsuccessfully attacked in their push towards Odessa. Earlier this week, a woman who managed to escape from Mariupol arrived at the Polish border and connected with the Drahomyrovas on social media, the young protester said. Drahomyrova’s mother directed her from the border to a hotel in Warsaw and then to a bus bound for Paris.

“She said the pigeons – they had fireplaces in their…basements, and she said they cooked pigeons there,” Maruysa said. “They don’t have water, they don’t have anything. … She said she had seen so many dead, friends die at her hands, and she couldn’t help them. There’s nothing that can help them, only close the sky and let people know how it is.

Marusya paused, then returned to a description she had used many times: “It’s just hell.”

CLICK HERE TO LEARN MORE ABOUT THE WASHINGTON EXAMINER

Amid the introductions, the three girls explained their instant friendliness. “There are a lot of people from all over Ukraine,” Masha said.

“But we’re all like brothers and sisters now,” Drahomyrova said.

“In this situation, yes,” Sonia added, to which Masha replied: “Yes, and always.”